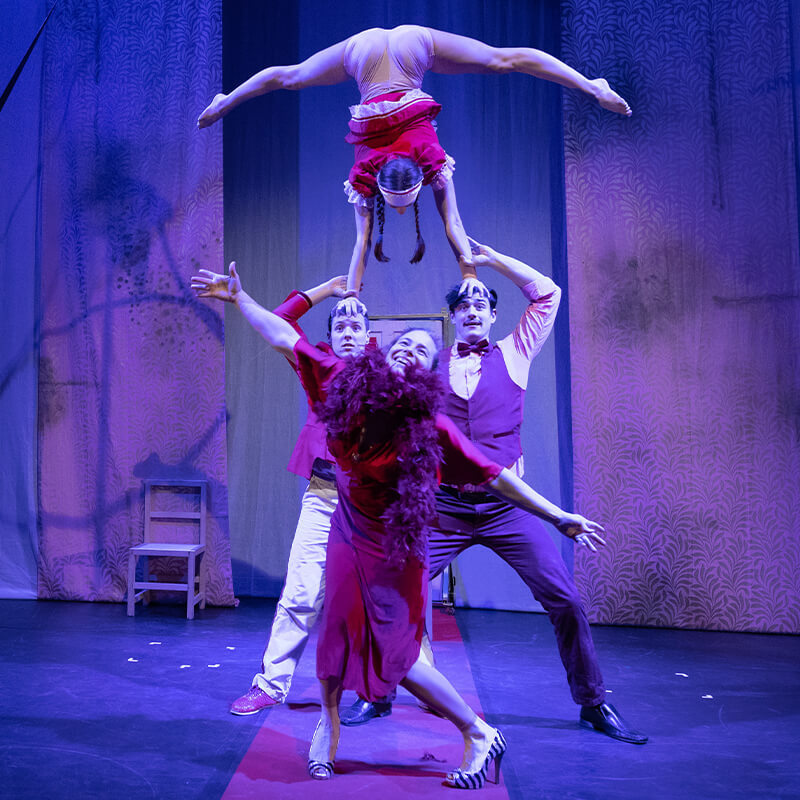 A five star review, without hesitation!

Hotel Paradiso is the sort of Fringe show everyone should see; it’s sassy and funny and clever and brilliantly put together.

It’s all based on a simple story, acted out on circus theatrics and acrobatics. The Hotel Paradiso lies on the French Riviera and has fallen upon hard times. Those left in the hotel are the owner (Madame), the concierge, the bellhop and the maid. One day they are visited by Miss Sausage (yes, that’s a running gag) and her banker, who present them with a deed of sale, then an eviction notice.

There are six in the cast, which is large by ensemble standards these days, and there’s a lot of action going on. Concentrate too much on one vignette and you’ll probably miss something on the other side of the stage. As a result this is a romp which moves quickly and easily through its paces; kids are entranced by simple gags and pratfalls (Madame turns a drunk-and-despairing scene into a fantastic hula-hoop display).

The musical accompaniment is perfectly suited, being just weird and edgy enough to work its magic. If there is one small issue to note it is that the sparse dialogue can be lost in the ambience; I’m blaming the background noise of air-conditioner and generator in the circus tent. But then again, how to close-mic such a performance ensemble, who are tumbling and turning and balancing five metres off the floor literally every minute?

Hotel Paradiso manages to give it all in a family show: juggling, trapeze, high wire, acrobatics and much more. Superb!

Where: The Peacock, Gluttony