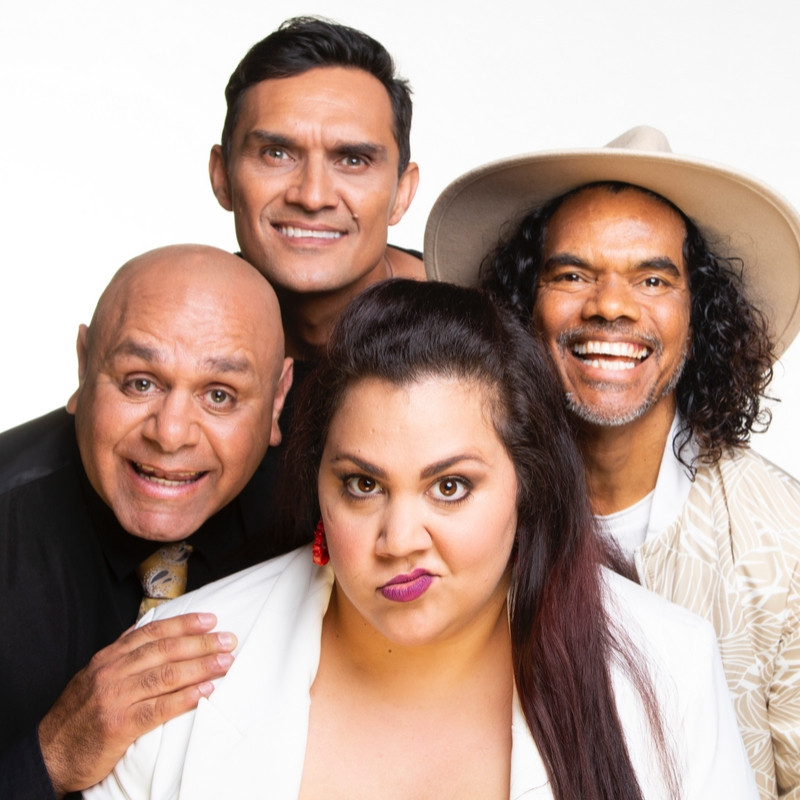 Sean Choolburra acts as MC for this fairly high-paced show, tonight before a very appreciative audience, but all four are onstage to greet us as we take our seats. Choolburra works a didgeridoo piece into the act and warms up the crowd before introducing Kev Kropinyeri.

Kropinyeri’s humour is direct; ‘bald and handsome’ he opines, and is pitched at the audience. He looks firstly at the degree of blackness required for true aboriginality, concluding there are none so black as a blue-black reservation Aborigine.

Choolburra bounds back onstage and delivers his best, a pastiche of five decades of dance, breaking the comedic thread before he introduces the next performer.

Steph Tisdel uses a self-deprecating routine, getting in her gags about body type and colour before they can be used against her it seems: ‘You may not know much about bra sizes but I’m a double J. That’s a fuckin’ long way down the alphabet.’ It’s a funny and clever routine which does a lot to temper her anger in discussing race relations. Considering a possible child with her redheaded English partner, she gets the best line of the night in thinking of a new term for their offspring. ‘Boomeranga I reckon, ‘cause when he grows up and leaves home he’ll keep coming back!’

Andy Saunders is a completely different sort of comedian. Subtle and sly, and crafty. In tackling the casual racism of colour he mentions he might be mistaken for an Indian, an idea he successfully revisits: ‘If the cops come in looking for a 6’3 Aboriginal then I can be Indian in a second, brother’. Saunders has apparently been on ‘The Block’ on TV, but when he reveals his other skills the fact that one didn’t know that becomes irrelevant. Saunders is both a mimic and vocaliser and beat-boxer of real calibre. His microphone technique is outstanding, his song to his daughter a real highlight.

Perhaps not so much Allstars as a mixed bag, but nonetheless thoroughly enjoyable.