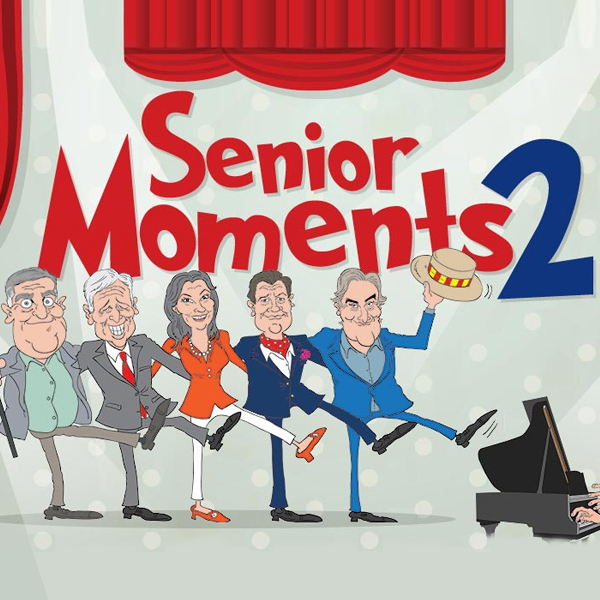 If ever there was proof that the seniors demographic is alive and well, it is in seeing how they pack out a theatre when offered  an age-targeted comedy show.  They aren’t just punctual. They come wildly early and party at the bar. The perfect audience. They never include later-comers. They are hungry for humour. They have a lot of terms of reference; i.e., years under their belts.

All this they demonstrated when the first Senior Moments production came to town last year. It was a big hit, starring Max Gilles and John Wood. Well pleased by Senior Moments, the seniors audience has raced back for more since Senior Moments 2 has been touted as “The Sequel without Equal."

It stars Max Gilles and John Howard, along with Tony Barber, Dave Callan, and Kim Lewis, with Dave Gibson adding voice. Sadly no John Wood and Benita Collings. And very sadly, no Jeff Harvey at the piano. The last Senior Moments was this beloved pianist's swan song.  This production features Mitchell Price-Norgaard on the piano, a fresh-faced WAAPA graduate, and the acrobatics of his fingers on the keyboard are an absolute highlight of this production.

Like Senior Moments, this show is a string of revue skits and, in general skit tradition, they are hit-and-miss.

That Ned Kelly’s disguise was created especially because it would be easy for modernist artists to paint tickled this critic’s funny bone a lot. Vegan steak knives as a prize, also funny. Peter FitzSimons' epic number of epic histories, funny.

The cast keeps the show hopping along for 90 minutes, albeit the stage manager is very busy helping Tony Barber on and off stage and into the relevant lights. Barber’s role of “narrator” enables him to keep the script in his hands at all times.  His voice wavers these days just as the Gilles memory wavers. He, too, carries the script when there are other than song lines. Indeed, his headliner role is more reduced in this show, albeit he is the most adored of the senior stars and is the one who always draws the eye. The younger cast members do the line-remembering and work with very good spirit. Wonderful John Howard brings the house down as Jan Utzen in the Sydney Opera House finale.

The script is again written by Kevin Brumpton and Angus FitzSimmons with the latter directing the show. The misses outweigh the hits in this incarnation. Some very promising ideas lose out with punch lines, the Mary MacKillop skit particularly, but the prime-ministers lineup has some lovely moments. For many, the parody of Slim-Dusty-style Australian C&W epics is a high spot.

In other words, there is probably something for everyone but not everything for anyone.

Don’t get your expectations up. Go with an open heart and appreciate the free programmes which are a comedy act in their own right.