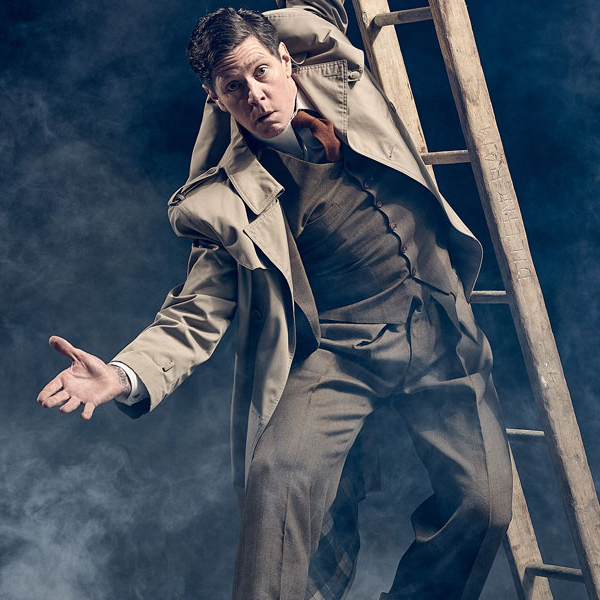 Three cheers for revivals. For those of us who missed a winner, they deliver a rare chance to catch up and, in this case, have a night rippling with laughter.

Patrick Barlow’s spoofed-up re-interpretation of the Hitchcock 1935 movie, itself derived from a novel by John Buchan, is an exercise in the magic of vaudevillian theatrical silliness. It delivers the script of the old black and white movie thriller The 39 Steps pretty much word-for-word, but wraps it in classic comic shtick. Only Nathan Page stays in character as the endlessly-fleeing hero, Richard Hannay, wrongly accused of murder. The other three actors leap from role to role in a positively acrobatic display of costume and accent changes amid Ailsa Paterson’s wildly perilous set of crates and tea chests, ladders and flying windows. It’s all fast and furious, with more corn than a box of Kellogg’s.

And, in its over-the-top retro comedy, it is fresh and surprising, especially for a generation for whom both Hitchcock and the genre of vaudeville are unfamiliar.

This show originally was performed in 2016 as directed by Jon Halpin. State’s popular 2019 associate director Corey McMahon has taken the reins for this incarnation and guided it with a sure hand into the realms of gasps and belly laughs.

Rightly, McMahon gives masses of praise to original creatives, composer Stuart Day and lighting designer Gavin Norris and it must be noted that Paterson as costume designer hit the nail on the head with the seemingly endless array of quick-change costumes for the panoply of characters.

It is a strenuous show for the actors in those roles.  Nathan Page keeps the ever-suffering good-guy facade in play as the innocent man dodging spies and cops as he tries get The 39 Steps message through to the villain in Scotland. As the murdered spy and also the girl from the train who ends up handcuffed to our hero, Anna Steen has icy Hitchcockian glamour and a lithe talent for physical comedy. She turns up in assorted other guises as the play rockets through its two acts. But it is the comedy duo of Tim Overton and Charles Mayer who swarm over the stage in lightning changes and many-accented madness. Their skills are breathtaking and their energy levels exhausting simply to behold.

The 39 Steps is a fairly absurd old spy thriller plot and sending it up was ever a terrific idea. Hence the success of its reiteration as a sell-out show.  Grab a ticket quickly before they’re all gone.