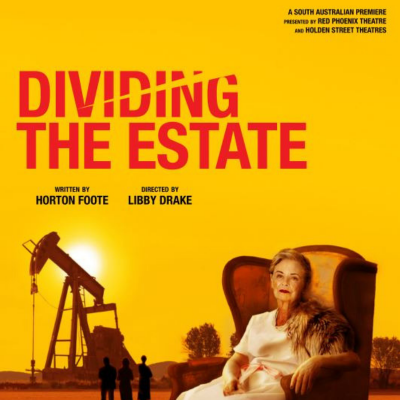 Predatory descendants and an elderly matriarch hanging on to control of her estate;  it’s an old, ugly story which resonates through affluent cultures.

In this case, it is a Texas family and the year is 1987. Pulitzer-Prize-winning playwright Horton Foote, notably screenwriter of To Kill a Mockingbird, was indeed a Texan and the play is strongly imbued in localised Americana; the old black family retainer, the grand old dynastic coastal cotton plantation and the generational choices between oil and agriculture. In this play, the ugly spectre of oil is proffered as perhaps the only salvation to the family’s declining fortunes. Real estate values are slumping and a tax bill hangs over the property.

The family has gathered for a dinner at the grand old home where easy-going Louise and her estate-managing son, just known as Son, have stayed close to the proud old matriarch, Stella. Like circling vultures, Louise's alcoholic brother Lewis, desperate with gambling debts, and their sister Mary Jo whose husband, Bob, is in financial difficulty, are ravenous for a share of the estate.  And thus, does the family interact over a disastrous dinner in which the geriatric family retainer, Doug, also is facing the ambitions of the younger generation.

The script is rich in the atmosphere of America’s Deep South and peppered with brittle barbs about avarice and influence. From time to time it is sharply humorous. Few of the characters are particularly likeable and it is the most loathsome of them all, Mary Jo, who dominates the action with her bitchy assertions of impatient entitlement.  In this role, Cate Rogers absolutely steals the show with panoply of spiteful, self-righteous and competitive expressions.  She brings awfulness to an entertaining art form.

Lyn Wilson plays the less abrasive sister. She’s a good actress and it is a pleasing characterisation. The redoubtable Jean Walker wears the role of the aging matriarch with grace and authority while, as her trusted grandson, Son, Mark Mulders establishes and sustains the family’s one thread of sanity with a strong and compassion-driven performance.  It is quite the contrast to the emotional roller coaster Brendan Cooney delivers as the feckless gambling son, not to mention the interesting shadow of deviousness generated by Lindsay Dunn as the son-in-law.

In all, director Libby Drake has chosen a very interesting cast of capable actors for this Red Phoenix production. The one incongruous thing she has chosen is to eschew American accents in the belief that this makes the play easier for Australian audiences to relate to. While one may be a bit tired of hearing American accents on the Adelaide stage, in this case a great deal of the rhythm, idiom, humour and cultural innuendo of the play suffers. Wayne Anthoney’s heart-rending performance as the old family retainer is compromised by the fact that his accent cannot iterate the music written into his wonderful old character's words.

The audience has to use its imagination and leap-frog into the idea that Australia has generations of loyal house servants.  On which subject, both Kate Anolak and Gabi Douglas are eminently appealing in their roles as the cook and the maid.  Also delightful in this large cast is Laura Antoniazzi as Son’s sensible girlfriend. Then there're Nicole Walker and Jasmine Leach ever scowling and primping as the heartless spoiled-brat granddaughters and Eliza Brampton as the garrulous teenage waitress who symbolises the inevitable future of divided estates.

Kate Prescott’s living and dining room set is eminently workable and aesthetic and full marks to the props team for the hot meal.

Director Libby Drake has put up a good defence in the program for her choice to play the production in Australian accents but, to this critic, it seems just a bit unfair on a Texan playwright’s piece of highly idiosyncratic Texas Americana.

That said, the audience enjoyed the show and left the theatre singing praises to its fabulous cast.