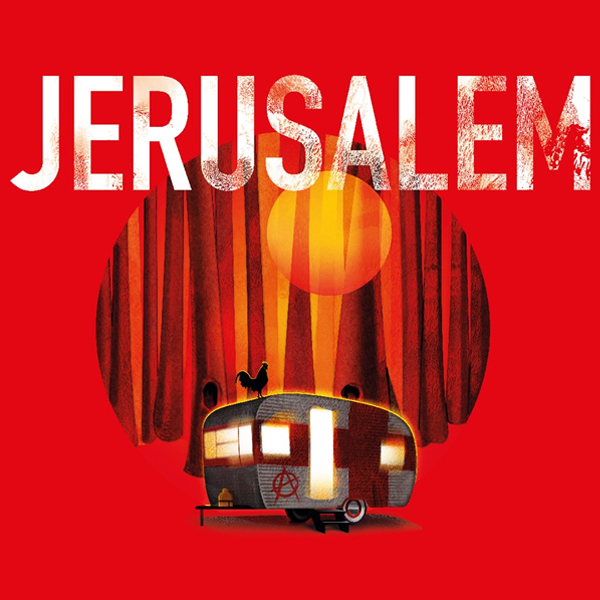 If ever a play came with a hurrah of hype, this is it. “Unarguably one of the best plays of the twenty-first century”, enthused a 2009 London review; one which stirred Theatre Guild director Nick Fagan to cite Jezz Butterworth’s Jerusalem as his “all-time favourite play”.

Hence comes this intense production transforming the Little Theatre into an extremely squalid glade of the woods in Wiltshire. It is a sensational set dominated by a battered caravan surrounded by messy domestica and post-party detritus.

It’s the long-term home of Johnny “Rooster” Byron, a one-time stunt rider and a generally dissolute and damaged character. The local council is hell-bent on evicting him from this piece of England’s green and pleasant land. They call him a “Diddicoy maggot” but he claims to be true Romany and asserts a defiant sense of entitlement. He passes his days peddling drugs, drinking himself to oblivion at any pub which will still have him and concocting ever-more fanciful stories to impress his drug-addled acolytes.

In stained singlet and massive workman’s boots, Brant Eustice gives a gruff obnoxiousness to Byron’s character. He seizes the audience’s admiration in his opening scene, downing in a gulp a raw egg and milk hangover breakfast. For the next three hours, he clomps and limps restlessly around the creaking little stage in an exhausting, explosive tour-de-force performance. Despite humanising moments when Byron interacts with his hapless little son, it is an irredeemably unpleasant character Eustice evokes.

There are moments of levity and craziness in the production but the promise that Jerusalem is a comic play is not fulfilled. It is, in fact, a somewhat turgid study of rural no-hopers.

Director Nick Fagan has rounded up a marvellous cast to embody the odd bods of Byron’s world on this St George’s Day when the Flintock Fair is revving up nearby. Council employee Wesley, played by Peter Davies, rocks up as a reluctant Morris dancer. He tries haplessly to forewarn Byron of the Council’s imminent actions against him.

Adrian Barnes presents a character of complete incongruity, the “professor”, a fading relic of erudition who is away with the Shakespearean pixies, or is he?  The elegant resonance of Barnes’ voice is dramatic cultural contrast to the hoarse bellowing of poor Byron, not to mention the strident exuberances of the girls. In itself, the Professor is a puzzling character. A lost soul of sentience in a hellhole of gullible boors? He is not particularly likeable, albeit his hypnotic stoned scene is clever and one of the more humorous snatches.

But this is not a play about likeable people. It is about “dark Satanic mills” on England’s green and pleasant land; an underworld in the woods. There are plenty of them in real life and the expansion of trendy housing estates does shine a light on them just as this play asserts.  A drunken down-and-out’s chaotic campsite is not compatible with a developer’s vision.

Among the good performances in Fagan’s production shines Robert Bell who is a newly risen star on the Adelaide stage. Ashley Penny is utterly arresting as the underage hanger-on, along with her rather less shrill but ever more tarty companion played by Harper Robb.  Benjamin Quick, Jonathan Pole, Georgia Stockham, and Oliver Reschke adorn the stage with good characterisations along with Allison Scharber, Curtis Shipley and Alan Fitzpatrick.

The play’s symbol of beauty and damaged hope is Phaedra, the missing teenager who manifests like a dream in angel wings. In this role, Eloise Quinn Valentine opens the play singing Jerusalem in unaccompanied perfection.

And, by the way, in this era of ubiquitous Americana upon our stages, there is something deeply refreshing about hearing a cast of Australian actors seeming quite at home in the lilting intonations of the English Wiltshire accent.

It is a long play and the Little Theatre is not very warm. Rug up.