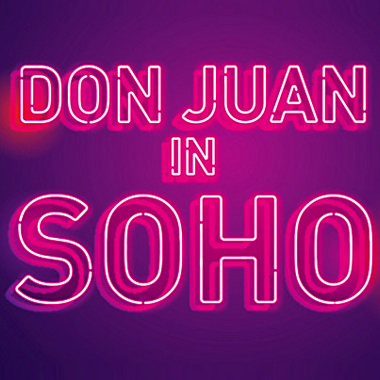 Once again Megan Dansie brings to the austerity of the Little Theatre a well-rounded and absorbing evening’s entertainment, albeit it is not for everyone. Audiences are well warned that Don Juan in Soho is confronting and, indeed, it evokes a few gasps but the play, written by Patrick Marber with a nod to Moliere's Don Juan, is a farce with a tragicomic spirit, so shock is assuaged by contempt, pity, and laughter. It’s quite the roller coaster. Don Juan, here known as DJ, is a degenerate nobleman whose licentious exploits are enabled by his long-suffering servant, Stan.

Through the generations, Don Juan has been played by some of the world’s romantic heavyweights: Errol Flynn; John Barrymore; Johnny Depp; and most recently in the long-running London production of this play, by David Tennant.  In this instance we have stalwart Adelaide character actor Peter Davies who is altogether more suave and handsome than he is sexy. It is a huge and complex role he has to fill, what with the nuances of high breeding, torrents of wonderfully perspicacious and provocative philosophising, drug-addled debauchery, and the desperate urges of satyriasis.  He makes a good whack at it especially in the outrageous multitasking fellatio scene. It’s a strong against-the-odds showing from Davies but it is Matt Houston as Don Juan’s hapless offsider who captures the eye and utterly steals the show. He assumes a delectably funny rustic accent and a long-suffering disposition, complete with a splendiferous repertoire of body language.  His timing is impeccable, as are his long meaningful looks and touches of pathos. He is emerging as one of the treasures of the Adelaide stage.

It is a large cast with which director Dansie peoples the stage in some lovely, moody scenes and moments of anarchical bedlam. Well costumed and lit, there are some lovely cameo performances, among them Kate Van Der Horst's Cockney Lotte and Ronald Densley's pukka Col,  Matthew Chapman as Pete and Peter Bleby as poor old dad. There is lively support from Miriam Keane, Sarika Young, Ellie O’Leary, and Rezuanul Jewel. And let’s not forget AJ Bartley in whiteout as the statue. There are moments when Dansie could whip the pace a little but she could never improve upon the feel-good curtain call which sends the audience out smiling into the dark autumn night.