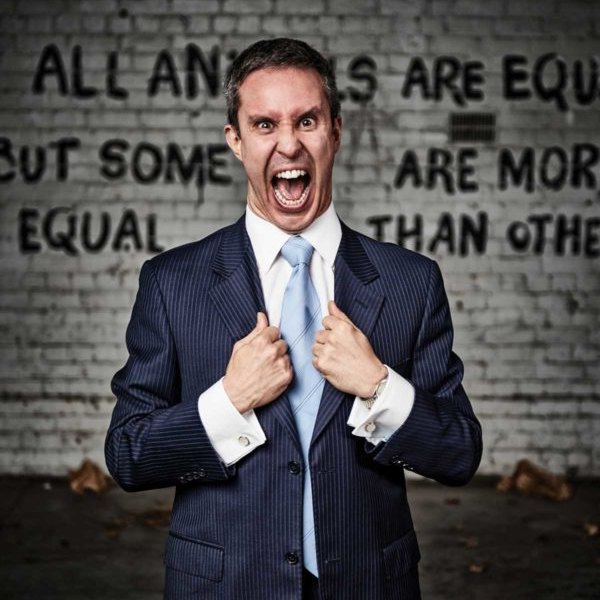 Clearly, from the plethora of solo shows in the Fringe, it seems we truly are in the era of the one-hander when actors are tested to the core to retain lines, sustain focus, and bring the stage alive, peopled by their own dramatic prowess.

In Renato Musolino’s case, it is not people but animals which must be evoked; lots and lots of them as so significantly conceived by George Orwell in the mighty political satire of the 1940s, Animal Farm.

If only things had changed. But no. Orwell’s dystopian animal utopia is as fresh as a steaming 2019 cow plop.

These many decades of world politics have produced only different shades of the same old ugly power-plays and corruption.

What was old is new again, or perhaps has just gone on and on.

For his last production before heading overseas for a new chapter in his career, State Theatre director Geordie Brookman adapted Orwell to the shape of a one-man presentation. It’s a neat cut and the show runs to about 80 minutes with the major characters well and truly intact.

Its staging design is strangely austere, just a raised truck supporting a row of slim lighting rods to symbolise the farm rules. Spots on posts flank the stage. Lighting plays a major role, coming in on the actor to transform him to what seems like a bodiless face suspended in the darkness or pulling out to show him whole, his shirt soaked in sweat as he plods relentlessly through farm labours, Musolino remains on the ramp of this set device. It is his magnified microcosm.

He uses his face and voice to realise the characters of the farm animals. His vocal agility is superb. He injects squeals and grunts into his dialogue, whinnies and growls; for each beast, an identifying voice, an expression or posture. Napoleon, king of the farm, the most equal on an ever-evolving hierarchy of more equal than others, is an oinking triumph of characterisation. Muslino leaps between beasts and one loathes the self-serving propagandist Squealer, loves the gruff cynicism of the wise old donkey Benjamin, and weeps for the valiant old horse Boxer, perhaps voiced a little old to begin with.  Orwell was commenting on the politics of the 40s with satirical swipes at Stalin, Lenin, Trotsky, Molotov, and others. But today’s audiences see modern politicians in this Brookman adaptation. They can’t wait to chew it over in the foyer.

It turns out to be quite a good bang for a State director to go out with.

The show had a short run in Adelaide at The Space and was booked out from the beginning. This critic was invited to the Barossa Valley to see it performed in the beautiful Brenton Langbien Theatre at Tanunda where, in such a large proscenium theatre, some of its detail was lost beyond about Row H. It needs an intimate space. One understands it will tour and, with the skill and stamina of Renato Musolino, it will stir and thrill wherever it goes.

Where: Space Theatre, and touring