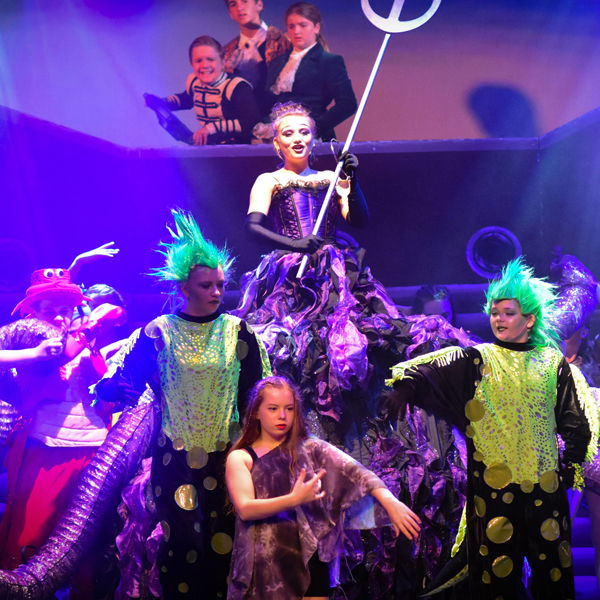 Here they come again, a cast of thousands of young children being reared in the art of stagecraft by the sterling Pelican Productions team.

Jen Frith, Kylie Green and Bec Schembri have been running annual school-holiday theatre camps for 15 years, recently adding an extra one to cope with demand. Young South Australians are very keen on theatre and performance skills and, as is evidenced in every showcase Pelican production, they get them in spades. It’s a rich incubation space for the future arts industry.

It is set to a recorded score with a team of cast and backstage crew getting huge sets on and off flawlessly and romping along at a lightning pace.

The costumes are stunning. Never have there been more elaborate fishtails; massive glitzy entities which rise high in the air when the mermaids dance or bow and can give quite a shimmer as a swimming motion. The girls wear black tights so their legs, technically, are sort of invisible. Ariel, the mermaid heroine, must dart and dash about with this long tail protruding behind her, until, of course, she trades in her voice to lose her mermaid tail and become mortal in a deal with Ursula, the evil octopus queen of the deep.

Ursula is another piece of spectacular costuming.  Her actress, Emma Pool, is elevated high in her cephalopod-inspired ball gown with writhing air-filled tentacles being juggled all around her by little aquatic servants, Mega tentacles on painted flats adorn the stage to complete the overarching sense of the sinister octopusian world. Pool gets to sing, most competently, some of the more demanding songs of the colourful Alan Menken score. It’s an evergreen Disney musical with much loved tunes, Under The Sea being the absolute favourite. In this production, it is performed within an absolutely delicious characterisation of Sebastian the crab by one Ariel Higgs.

Alternate casts for Pelican Production performances mean that one cannot see all the talent at once. Alex Hasler as the Prince is the only principal in all Little Mermaid performances. Ariel, the sweet-singing star of the show, is alternated between Zara Blight and Jelena Nicdao. In this performance, among the outstanding young talent is Neve Sargeant as Scuttle the seagull and Liam Holland as little King Triton.

The ensemble work is superb. Aged from 8 to 19, of all shapes and sizes, the ensemble of seagulls and dancers displays absolute discipline, each individual seeming to shine with joy, notably among them Jasper Darwent, Sierra Vannini and Aisha Skinner.

If there is one flaw to this short and sweet production, it is the sound. Pelican has very high production values and has always been very professional in its technical aspects but in this show it seems a bit too heavy on the amps. Even 8-year-olds in the audience were protesting the volume.  Sound at shows is becoming quite an issue these days with so many mature performers complaining of accumulated hearing damage through their stage lives, so it is all the more vital that young talent be protected as prudently as possible.