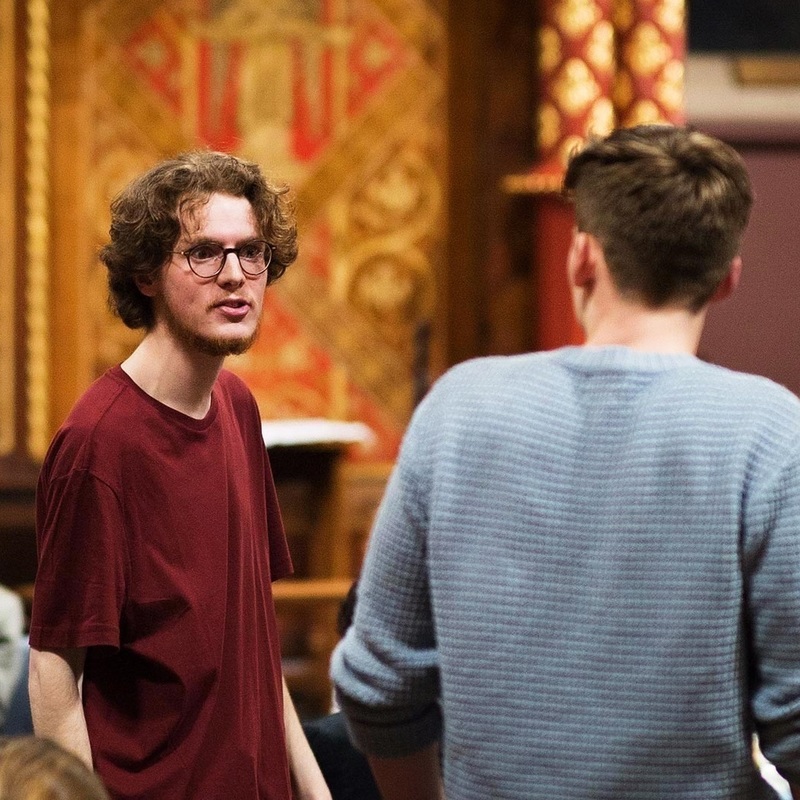 The Mark Drama is a dramatic presentation of the Gospel of Mark. Every incident in the whole of Mark’s Gospel is performed in theatre-in-the-round in 90 minutes and the audience will hear nearly all the words of Jesus as quoted in Mark. Englishman Andrew Page conceived of the idea some years ago and The Mark Drama is produced all over the world in many languages. No props, lights, costumes, or even actors are required – all you need is to throw fifteen Christians to the theatrical lions. Page thoughtfully provides a guidebook called The Mark Experiment through which the participants learn each of the six key parts of Mark’s Gospel in just ten minutes. The technique of learning and staging the play is copyrighted. For the St Barnabas production, the players had six weeks to memorise their speeches, but as per usual for The Mark Drama system, they only started working together on their interactive movements - under the direction of Reverend Ben Woodd and Henry Davis –shortly before the performance. Rehearsals for Saturday night started on Thursday and finished on Saturday morning, just in time for opening the two-night season later that evening.

The interior of the cavernous St Barnabas Anglican Church is bare, like somebody took all the fixtures and stripped the walls. Seats are arranged in a circle around a tiny acting area the size of a bathroom. The house was packed on opening night. The Gospel comes to life with the exuberance and enthusiasm of the mostly young adult players. They convey the excitement of witnessing miracles and the joy of gratitude from those restored - Jesus gets a big hug every time. Wry humour resides in gossipy asides and ironic flourishes. Amusing is the laziness of the disciples and their initial failures in belief, such as the storm and the walking-on-water incidents during the several crossings of the Galilee - wonderfully portrayed with some imaginary sculling. Yet the disciples do grow in faith and respect, and attempt to protect and advise him, as the end draws near. With a cast of fifteen whooping it up, the audience gets a palpable sense of the awe and agitation created by the presence of Jesus. It’s sometimes electric as the closely packed audience provides additional crowd.

David Lang’s demonstration of Jesus’s distress and anguish in the Garden of Gethsemane, and during the torture and crucifixion, were a startling contrast to his busy and capable Jesus of earlier chapters. Though he had little chance in his role as the Son of God to demonstrate his prowess as a PhD in musical composition. The theatre arena is used very effectively when the players perambulate down the three aisles and along the rows to demonstrate a Jesus constantly on the move throughout Palestine. The production is swift-paced, fun, spontaneous and educational. An unpolished gem.

Whether you are a reader of the Gospels or not, or a believer or not, this is entertaining, grass roots theatre where the didactic discourse is delivered with zesty passion.