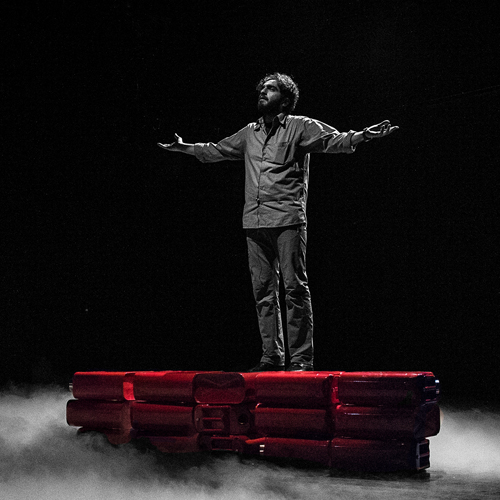 Teenagers’s lips were sewn together in protest. Reza Berati, a 23-year-old Iranian Kurd asylum seeker, was clubbed to death by two Manusians in 2014.  Iranian Omid Masoumali self-immolated in April 2016 in detention in Nauru in protest of conditions and delay. He died a few days later. Violence and self-harm were said to be daily occurrences in Australia’s poorly run detention centres as a consequence of the Pacific Solution – a policy where no asylum seeker by boat, refugee or otherwise, would set foot on Australia. These and other stories illustrate the shameful and cruel reality of Manus Island and Nauru detention and are starkly realised in this production by Verbatim Theatre Group.

Nazanin Sahamizadeh formed the company in 2013 specifically to inform her fellow Iranians of the appalling conditions of illegal immigration to Australia. She and her seven fellow cast members use rotating monologue to recount in verbatim the words of asylum seekers and refugees which had been smuggled out from the camps. The main character is Behrouz Boochani, an Iranian-Kurd who fled Iran after his colleagues were arrested. Picked up as a boat person and sent to Manus, he has managed to regularly report to The Guardian using a mobile phone. He is still on Manus Island where he was taken in 2013.

Each actor inhabits a main story of misery, starting with their reasons for illegal immigration. Conditions of near starvation and fearing each day will be your last during the sea crossing in leaky boats, and finally being swamped by stormy waves are imaginatively represented with raining water and a flotilla of jerry cans. However, the camps are not conjured as well. The declamatory and shouty deliveries from the cast are unchanging. The idea of verbatim text precludes useful and dramatic interaction between characters and the result is something like eight simultaneous one-person performances. Persian audiences can easily cope with the often hurriedly delivered text, but for the rest of us, the constant effort to refer to the surtitles took our gaze and empathy away from the performance; more non-verbal communication would alleviate this. Even so, gut-wrenching performances realise the mental and physical breakdown caused by lack of control, gnawing uncertainty, and poor conditions. Indeed, the production is so successful in conveying the miserable and harrowing journey of illegal immigration by boat to Australia that it might even act as a deterrent, which of course, is government policy.

Manus is an uncomfortable truth-telling and to hear the word Australia associated with perpetrator is embarrassing and shameful.