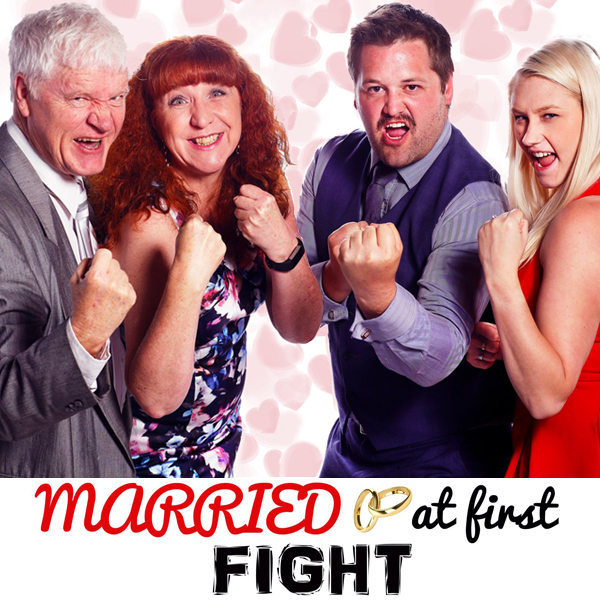 I can assure you that no marriages were consummated in the making of this show, but out of an audience of a hundred, maybe two marriages were saved and a lot more saw something good about it. Producer and director Matthew Byrne’s intention may have been to savage Nine Network’s Married At First Sight for its risk of ritual embarrassment, but maybe he realised that the original couldn’t be any worse, or why kick a dog that doesn’t know any better. His spoofs of scenes from the series too closely resembled the worst of the real thing. What he has written instead is a compassionate, thoughtful, and wryly humorous love letter to marriage, following the formula of all his other Fringe shows and the affections of 2014’s dateless.com and The Luv Boat of 2016. One is beginning to think that as well as being a fine actor-comedian-producer in the manner of Benny Hill and Bob Hope, Byrne is also a sentimental bloke.

The fans of Byrne’s Fringe shows – and there are many or he wouldn’t be gifting a new show every year for 16 years - will recognise the routines that seem so constant and formatted, but the excoriating fan mail would flood in if he left anything out. Two couples, one young and one ageless, will have to cope when the masks come off. We follow their feelings from the reasoning of going on such a crazy show to reflections on the outcome. On the journey, joker Irish priests, rapacious wedding planners, go-with-the-flow celebrants, nervous parents, crappy vows, and the worst wedding parties possible are encountered.

Jokes are sometimes borrowed, sometimes new. What’s the difference between a wife and a girlfriend? 20 kilos. Marriage isn’t a word, it’s a sentence. She jumped out of a wedding cake, but then she got bulimia, and the cake jumped out of her. The thing is there’s so many, possibly a couple hundred, and once your first laugh comes, the rest come easier. Besides Byrne himself, two other entertainers return from last year’s Hott Property. Amber Platten is precious in her dumb blond mode, and is objectified mercilessly. Brad Butvila presents more sides to the human condition than a Hindi god. Rose Vallen is as warm as a hot water bottle on a winter night.

Annually, my resistance to the two hour format retreats from a vaudevillian onslaught of laughter and love.