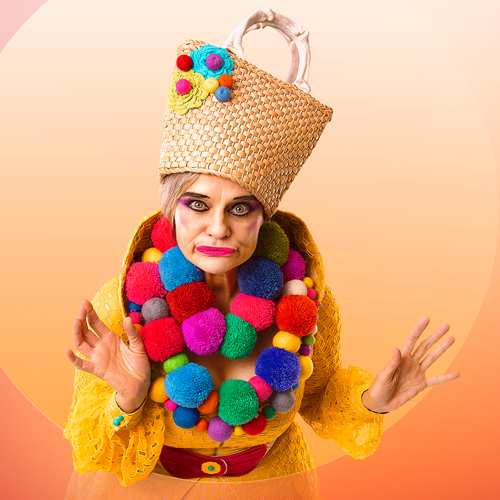 Once upon a time, Baba Yaga was a sinister and ugly old witch from a Slavic folktale who was prone to eating children and lived in the forest in a house which teetered about on chicken legs. She came from the era of Struwwelpeter and Hansel and Gretel when terrifying tales of cannibalism and child abuse were considered very nice for young minds.

We’re all a bit more sensitive and PC these days, and so is Baba Yaga, since the Windmill and Imaginate creatives have given the old witch a “reboot” into modern idiom.

Now, from deformed and smelly old hag, she is an exotically glamorous eccentric with special powers, an insatiable hunger, and a bent for jelly babies. Instead of living in the swampy forest, she dwells on Floor 101 of the Poultry Park Apartments tower block. It’s a pretty austere place with myriad repressive rules, most importantly about noise. Every sound the poor receptionist makes is amplified and she is harangued by angry tenants calling for silence. Of course, Baba Yaga is another contributor to the din and when the receptionist goes up to Baba's lofty world, she becomes embroiled and thrown into strange and dangerous predicaments.

The design team has come up with a very compact and simple set of deceptive sophistication. Windows pop up allowing for the videoed faces of assorted tenants and, beside the reception desk, is a simple elevator projection which enables Vaselina, the receptionist, to ride to the heights of 101 and, like Charlie and the Great Glass Elevator, even beyond. Baba Yaga’s world with its sacred cactus flowers and amazing jungle is all vivid animation and video projection. It is clear and effective. While Vaselina is attired in a strange puffy hooded fashion confection, Baba Yaga is in strident yellow with a shopping basket hat and multi-coloured accessories. But it is her dramatic eye makeup and the madly expressive mouth with its savage gash of lipstick on which the focus falls.

Elizabeth Hay, a little shrill in her assumed child’s voice, is every inch the innocent abroad as she falls into Baba Yaga’s thrall, a nice performance. But Christine Johnston steals the show. She is the show. She creates a big, big character, untamed and dangerous, yet funny and creative. Hers is a powerhouse performance and her vocal range is truly astounding.

One is not sure the original Baba Yagas would recognise this 2019 embodiment as one of their own. She is the mischievous mystery hag de jour starring in a delectable concoction of theatre for the young.