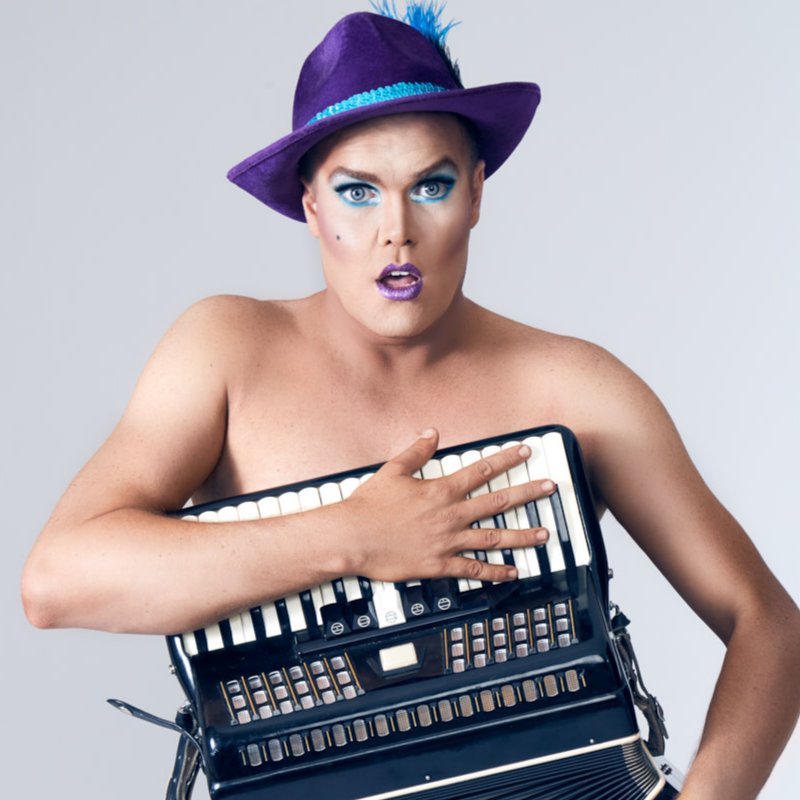 Our Hans can do no wrong. We love him as shamelessly as he is shameless. Year after year his doting fans pack his venues to the rafters and fall about in mirth at his every piece of cheeky shtick.

So what can one say that is new or different about his 2019 production?

Only that it is 2019 and he is more famous than ever, the international star who wowed America’s Got Talent and went on to play Las Vegas. He has photos to prove it. Only at the Paris Hotel, he says, but he’s working on getting to play the Bellagio.

Being a man of the moment, Hans, aka Matt Gilbertson, opens the show in Sound-of-Music mode but wearing cute little German pedal pushers and bike helmet and doing perilous loops on a Fringe Lime Scooter. What? No bling?

Don’t be silly. The bling is beneath. He strips down to reveal gorgeous midnight peacock sequins on another clever Mum-made outfit.

Rock the Boat, he sings, and the audience rocks along with him. “Do I know my audience or what?” he brags. Ah, but are there any Germans? Yes. Oh, local Germans. Not as bad as having the German Ambassador on opening night, eh, as happened.

Hans already has cast his eagle eye across the audience. He has spotted the potential targets. He has patter going with his front row, perky teases.

He does something different; does some Sound of Music a la Brecht and Weil. Stunning. Applause. Applause.

Time for audience participation. He hauls up the prepared victims to frock up as dancers. It is funny but he does not take the audience humour to the risqué lengths of yore. He may utter a lot of expletives but he’s family friendlier these days. It’s the 4.45pm timeslot, he says.

Hans is a bundle of unbridled energy. It is hot as hell outside on this heatwave afternoon, but Hans is hotter hot stuff. He is a stomping, pivoting, whirling, marching, shimmying whirlwind. He’s on accordion. He’s on piano. He’s belting out songs with his bigger and absolutely marvellous Ungrateful Bastards band with its sensational pianist backup singer.  There are no Lucky Bitches this year. Hans dances alone. He does the splits alone. Some men in the audience might miss the dancing girls, but Hans doesn't seem to.  He is Adelaide’s favourite home-grown superstar.  He’s what his audience wants and he gives them an ever-loving all.