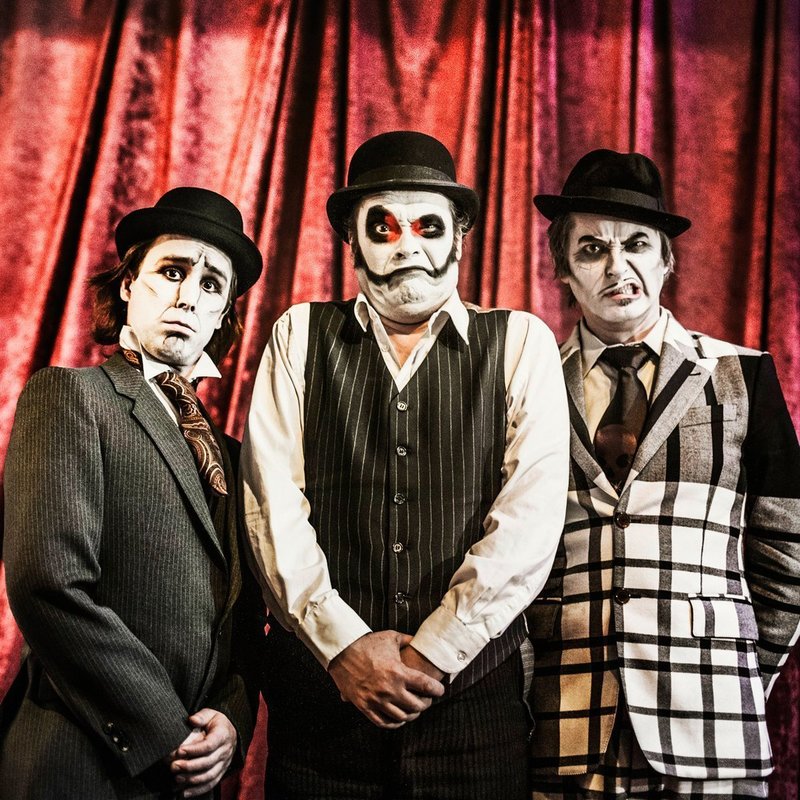 The British trio, The Tiger Lillies, was formed in 1989 by singer-songwriter Martyn Jacques. Adrian Stout replaced the original bassist in 1995 while drummer Jonas Golland joined up in 2015, so they’ve been a fairly stable combo for a while. The Tiger Lillies have been nominated for many awards but the highlight was an Olivier award and four other nominations for the adolescent-loved musical Shockheaded Peter in 2002. Their reputation precedes them. They are famous for their ghoulish make-up and costumes, accomplished yet understated musicianship, and macabre themes. Apparently they used to shock people. Commentators attribute stylistic influences toBertolt Brecht and Kurt Weill –Weimar Berlin cabaret in general – as well as gypsy, circus and British music hall. There could not be a better venue for the Lillies than the Gothic Elder Hall.

Having never seen the Lillies, one finds their new act, The Tiger Lillies Present Edgar Allan Poe’s Haunted Palace, completely underwhelming. The musical trio is aptly aided by a female and a male actor performing in a narrative which one does not fully grasp except for references to Edgar Allan Poe’s large and famous oeuvre of poems. Within the context of a Victorian theatre tradition, a cavalcade of imagery is implemented by superbly timed digital moving and still mega-graphics. Weird and wonderfully ethereal musical arrangements, and instruments, are fascinating. But the songs are individually monotonous and collectively too similar, always delivered in Jacques’s falsetto, and often finishing with a smug and showy flourish. The performance work by the couple is a lot of action without clarity of purpose with an unsatisfying and ambiguous denouement. The show falls in the crack betwixt cheap horror tricks appealing to an adolescent crowd – which they do – and having sufficient variety to keep an experienced theatergoer engaged. Applause for each song fades as the night wears on and seems weak following the confused ending.

One suspects Lillies’ fans might find this a bit of a let-down, while more than an hour is too long for the newbies.