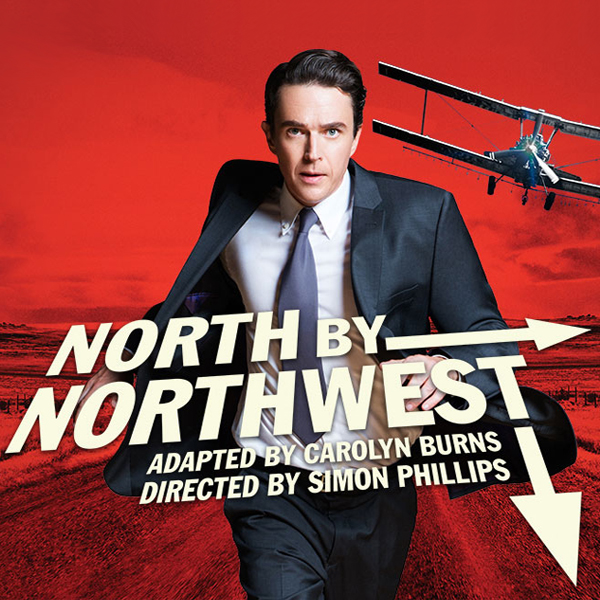 How on earth can they pull it off? That’s the question we’ve all been asking. And why would anyone attempt to put an Alfred Hitchcock action movie on stage?

Of all the things to choose, a movie famous for a chase by crop-duster through cornfields seems the most technically absurd.

But the mistake potential audiences have been making is in a literal expectation.

First qualification for adoring this way out-there, brilliant piece of theatre is familiarity with the original film. If you haven’t seen it, the play will amuse but confuse.

The second qualification for revelling in the night’s entertainment is to be able recognise that the whole thing has an almighty tongue in a gigantic Hollywood cheek.  It is a daring parody and also a sophisticated homage.

The plot follows a case of mistaken identity when advertising executive Roger O. Thornhill is abducted by thugs and swept into a sinister world of crime and espionage. The story scoots about in trains and planes from New York, through Chicago and Indiana, to its climax at Mount Rushmore, South Dakota. Along the way, there’s love with the mysterious fellow traveller Eve Kendall.

Carolyn Burns’s adaptation preserves the integrity of the movie beautifully, sustaining the quippish nature of the Hitchcockian dialogue. There’s a light-hearted edge to the most perilous of circumstances. And, of these, there are many; shootings and conspiratorial meetings, chases and more chases.

It’s no plot-spoiler that the tale climaxes on the face of Mount Rushmore. The plot spoiler would be to reveal how Simon Phillips and his team have replicated this. The joy of the show, or one of them, is the ingenious and hilarious ways in which scale and filmic effects are achieved. It’s oh, so simple and yet oh, so ingenious. Oh yes, and oh, so funny.

The set, devised by director Simon Phillips and Nick Schlieper, is a series of large layered grids, clearly suggestive of celluloid film frames. They rise and drop according to the depth of scene involved. Doors and windows, rooms and open space are achieved according to their use while a huge screen provides backdrop with all manner of projected images. At wings to the stage are little boxed-off special effects “studios” where much of the visual magic of the show is created.

What is old is new again.

The audience is captivated from the word go, or, should one say, the many words of the witty introductory credits. In themselves, they raise spontaneous applause. There’s another round on recognition of a classic Hitchcock cameo. Blink, and you’ve missed it, just as in the suspense director’s movies.

The costumes are superb, just as they were in those schmick days of Hitchcock’s good taste. Fifties folk were smart dressers and their fashions are back in style. In the principal role is Matt Day, as slick and handsome as was Cary Grant in the film. Day captures the qualities of the old movie star in gait and manner. Beautifully. Amber McMahon in a massive blonde wig, mirrors the ice maiden elusiveness of Eva Marie Saint’s performance in the film. Her accent is a little mysterious but, oh, how she uses those big, wide eyes.

There’s a cast of thousands portrayed by the other eleven actors in a miracle of quick costume changes. They people the stage as myriad film extras, strutting, hunching, limping dashing in an endless array of garb and characterisation - from chilly pedestrians and railway staff to auction house elites and vicious goons. The comings and goings are choreographed to the split second to loud, wild movie music, some of it original, some composed and sound-scaped by Ian McDonald.

This is action-packed theatre.

North by Northwest was Hitchcock’s great cinema achievement. Now, as a loving pastiche, it belongs to Simon Phillips.

It is a blockbuster of vivid anachronism.