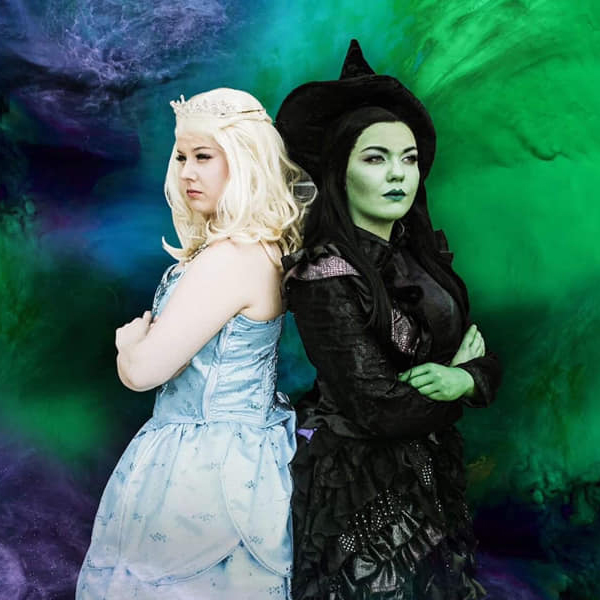 Wicked is AYT’s 30th production since its formation in 2010 and it shines with the gloss of a very successful evolution. The company was devised by Emma Riggs and Kerreane Sarti to stretch the wings of upcoming Adelaide thespians. It is a serious business, the cast and crew investing in the experience surrounded by teachers and seasoned volunteers. In the case of Wicked, it is airing two whole casts in alternate performances under fledgling directors. This means a company of 80 plus. The logistics alone is daunting. The result, however, is superb.

It is hard to find a weak spot in this mighty production of the weird and wonderful Stephen Schwartz and Winnie Holzman musical, based on a Gregory Maguire novel, which ponders a backstory to the Wizard of Oz. The story goes that Oz’s two witches, the good Glinda and the wicked Elphaba started out as schoolmates. Hence spring the big choreographed and choral numbers in school uniforms as well as wild green scenes as the Emerald City comes into the picture. There’s an appeal to contemporary young in the issues of besties and boys and fashion, loyalty and cruelty, clothes and magic. Glinda would be very much at home as a contemporary teen vlogger.

AYT’s rendering of the show is something of a grand spectacle. Against some simple, brutalistic base sets which enable tiered central action, the production is a feast of vivid lighting and perhaps a bit too much smoke. The costumes are sensational. They scream big budget, no corners cut.

The huge cast is uniformly focused and immaculately drilled through myriad great big scenes. Beneath the singing and dancing is a huge orchestra which musical director Jennifer Trijo has managed to keep perfectly balanced against the stage vocals. Indeed, with body mikes, the sound levels of this show are absolutely schmick.

Then there are the voices. Courtney Sandford plays Glinda with a pure, bright Broadway voice which can hit glass-shattering notes with seeming ease. It’s a funny and vivacious characterisation she delivers, too.

Naomi Crosby has to work greenface as the wicked Elphaba. This does not undermine her commanding stage presence nor the power and beauty of her voice.

It is a three-hour show with some lengthy and difficult songs. But the production does not pall. The audience, largely of AYT teen peers, is enthusiastically engaged from woe to go, leaping up at the end to respond with a standing ovation.

Asked after the show how many marks they would give this theatre experience, one group of girls put their heads together and then announced “ten and a half out of ten”.

That says it all.

Now, if only the government could revive the Festival City’s arts industry with proper funding and give this wealth of youthful talent a future in the business.