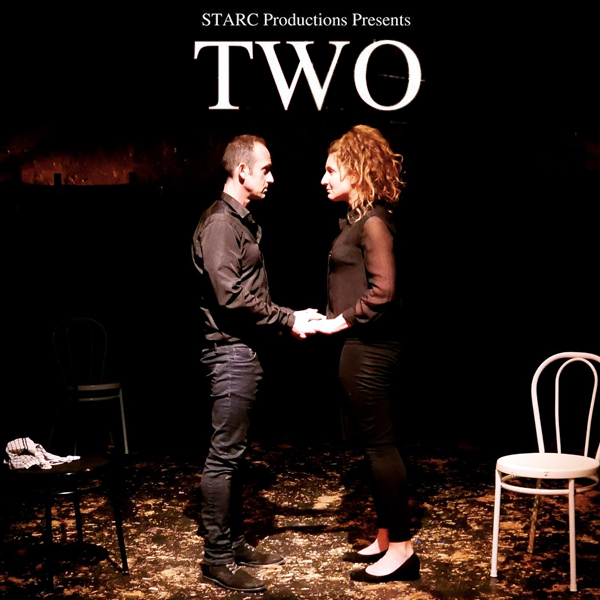 A rising star on the professional sidelines of Adelaide theatre is this tiny company: just three people, a director and two performers.

Director Tony Knight has taught both actors, Stefanie Rossi and Marc Clement, and they are a couple. It is a rare, tight-knit stage relationship and, as STARC, they come together expressing specific theatrical purposes. Jim Cartwright’s Two is an ideal showcase. The two actors perform fourteen roles depicting a night in the life of a north of England pub. The principal characters are the Landlady and Landlord, the publicans, with their familiar customer banter across the bar and their domestic acrimony behind it. These characters play straight through the fourth wall, audience members playing the throng in the pub being handed drinks and sandwiches. Thereafter, from the depths of the black stage arrive the regular customers, a cross-section of locals from the sad elderly to the crass would-be courtship. It’s quick changes and monologues, accents and character capsules for the actors.

The idea behind the play is that everyone is a story, if you just stop to listen to them. The truth also is that not everyone is interesting. A lot of characters in this world are clichéd because cliché emerges from commonality. And there is no place with a greater common thread than the local pub; or so it always used to be in the UK of yore.

The on-the-make rogue with a roving eye makes peacock play for women in the audience but in truth is a manipulative parasite on his hapless girlfriend. The old biddie wrapped in scarves just has to get away from the burden of caring for her ageing dependent. Old age, in the Cartwright view, is pitiful. Youth is harried and shallow. People are damaged. Drinking is party and panacea. The publicans keep the drinks flowing as the crowds ebb and flow and then are left with a lot of glasses and their own private demons.

Knight’s direction and Stephen Dean’s lighting convey an intensity to this world. The action is played downstage, right in the face of the audience. Not all the characterisations soar. The publicans are well-observed and delivered by Rossi and Clements. They are believable and are the lynchpins of the production. The actors struggle a little with the geriatrics but thrive on the antics of the show-off pair Moth and Maude and the other pair with their torment of jealousy and brooding violence. Rossi is quite heartbreaking as that broken woman while Clement is aptly shocking. They are a golden pair of talented actors, rightly mentored by their distinguished director.

There are few flaws, perhaps just the vocal efforts at old age and, truth be told, some low spots in the award-winning playwright’s script.

In all, however, it is another rewarding voyage into another world on the stage of the Bakehouse Theatre.