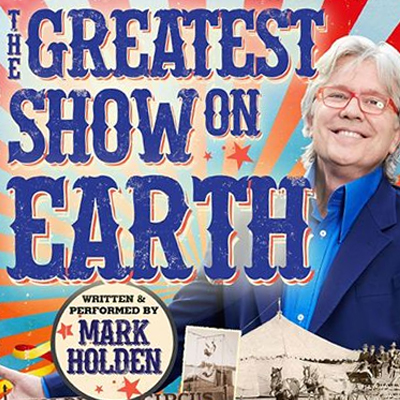 Veteran Aussie rocker Mark Holden has seen a few ups and downs through his career. The Carnation Kid soared to success as a fresh-faced Adelaide lad before his career palled, rose, dropped, sparkled…

This tale is the substance of his Cabaret Festival show.

Clad in a snazzy red ringmaster’s jacket and accompanied by a four-piece band on the stage,  he relates the Holden family saga, how he was descended from true circus folk, salt of the earth farmer circus folk who toured from Gelong to Ceduna in the early 1900s.  It all began with the one-legged slack-wire and trapeze artist, Adolphus and his nine singing, dancing acrobatic children. Adolphus played the Tivoli in the 1870s. Holden has grainy old black and white photos projected onto a huge screen to prove it all and he sings a yodelling country and western number, My Dear Old Daddy, while the audience gazes at the image of a rural big top of yore. It was the Holden Ashton Circus in those days.

Mark Holden asserts that the circus is in his blood and, indeed, pulses merrily through the veins of all the Holden descendants.

Thus does he tell of Holden travels and travails, highs and lows, success and failure, hardship and success.

There was a grim shadow in the family history, Holden reveals. They farmed lovely land around Geelong where the Aboriginal people long had camped and travelled. But no more, the Wathaurong.  The settlers, his ancestors among them, sent out “kill parties” to slaughter them and deter their return to the farmlands.  Holden laments this awful legacy and has worked with the Aboriginal community and particularly one Mick Ryan creating a fierce history song called The Kill Party. He furthers the theme with a dispossession song, beautifully arranged albeit a forgettable tune.

The stage lighting, with fair-haired Holden in his red coat beneath projected scenes of verdant Australian landscape, is particularly pleasing to the eye and the old rocker is in fine voice.

His bio show is divided into chapters and thus comes the Countdown era with Holden singing Never Fall in Love Again, the screen showing scenes of the wild fandom of the day and the evolution of the Holden’s red carnation tradition.

With video clips illustrating the moments, he swings through his historic casting as the first ever Joseph of Joseph and the Amazing Technicolour Dream Coat, his early acting in The Young Doctors, time with the Hoff on Baywatch, a battle with cancer, a return to law school, the days of Vanessa Amorosi, Australian Idol, and Dancing with the Stars.

Holden has been in and out of the spotlight for decades so he has a wealth of tales to tell; perhaps too many.  The show could do with a cut, albeit Holden races through the mass of anecdotes and nostalgia with amiable efficiency.

The old star has not lost his appeal and there are lots of fans in the audience.

For a grand finale, he distributes red carnations throughout the auditorium, a gesture which is acclaimed with delight.

From the experiences of his career, today’s wise and seasoned Mark Holden promotes a theme of Nothing Lasts Forever and "making the best of what you’ve got”.

He gives us a substantial sentimental journey and a hearty slice of Australian entertainment history.