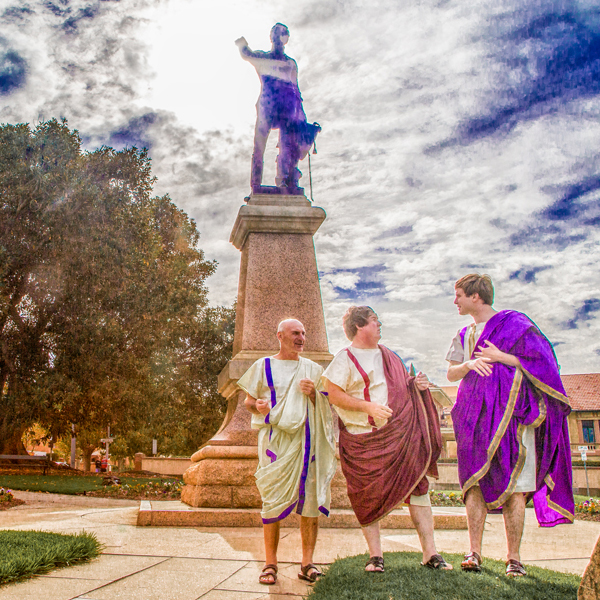 So it comes to pass that history is littered with mad men in power. As we wring our hands over Trump and Kim Jong Un, we perhaps may take quivering comfort in the fact that Rome once upon a time had what one could only call a completely sinister psycho as it leader.

Caligula was reputed to have had a child’s head cut off to cure his cough.

He had people executed just to make a point. If life was dull for him, he’d close the grain stores and cause a famine.

According to this theatrical interpretation of Caligula’s life, one written by Albert Camus and newly translated by David Grieg, 29-year-old Caligula had suffered some sort of dark epiphany at the death of his sister, with whom he had an incestuous relationship, and he believed that life was absolutely pointless. Hence, his rule over Rome, its citizens and its patricians, was to be one of pitiless menace. His subjects were to be his playthings.

In Michael Eustice’s sleek Red Phoenix production, the Roman senators are a clutch of lazy, opportunistic and conniving acolytes. Eustice has cast them beautifully and clad them in elaborate short togas in which the actors have had to learn to bend from knee like girls had to do in the miniskirt era. These awkward togas are almost characters in their own right and they would be distracting were it not for Robert Bell’s portrayal of Caligula. What a portrait of sublime insouciance he paints. How perfectly has he tapped into Caligula’s lethal mood swings: calculating, bored, unsympathetic, charming, manipulative, ever remorseless. His movements are considered, carefully paced, just as his words are enunciated to the last spit of an articulate “t”. He vamps. He torments. And, oh, what a surprisingly effective visual treat arrives when he is unveiled as Venus.

Well directed and artfully compelling for every moment he is onstage, Robert Bell continues to be an exciting presence on the Adelaide stage.

The actors in togas playing the bevy of senatorial yes men are clearly having fun with their roles. They’re fine and seasoned actors all, and they can measure the degree to which they may ham it up. They are David Grybowski, David Lockwood, Joshua Coldwell, John Rosen, Malcolm Walton, and Adrian Barnes. The world “patrician” does not spring to mind as they establish their characters. They are a political parody. They cluster, they swarm, they mass, they grovel, their movements very nicely plotted by director Michael Eustice.

His brother Brant Eustice plays Cherea, the brains of the pack and the man from whom Caligula seems to seek approval. Eustice is a poignant picture of troubled integrity as he sits reluctantly on the throne with Caligula at his feet. As with his interactions with the young poet, Scipio, touchingly played by Mark Mulders, Caligula is hellbent on proving that everything is hypocrisy. Loyalty to one cause is disloyalty to the opposing one. Heads, he wins. Tails, you lose. Camus’s play is a wonderfully provocative contemplation on ethics and morals, on love and principles, on power and madness, on political intrigue and political expediency.

Women are relegated to the background in this world. Their power depends upon Caligula’s favour and this is mercurial. They work hard to maintain self-preservation. Helicoin is the one-time slave who became her master’s muse, the wise counsel who neither wins nor loses. For the wonderful Tracy Walker, her character is a walk in the park. Similarly, Lyn Wilson is solid and simpatico as Caesonia, the older woman who assumes the role of his lover. Her denouement is heart-stopping. Ruby Faith as one of cruel Caligula's playthings makes good effect of a cameo role.

Many are the magical moments of this Red Phoenix production, set on a darkly minimalist stage featuring a great dulled mirror on which Caligula may confirm reflections of his greatness. The lighting is effective and the logistics of using three entrance and exit areas of The Studio bring the audience right into the embrace of the action.