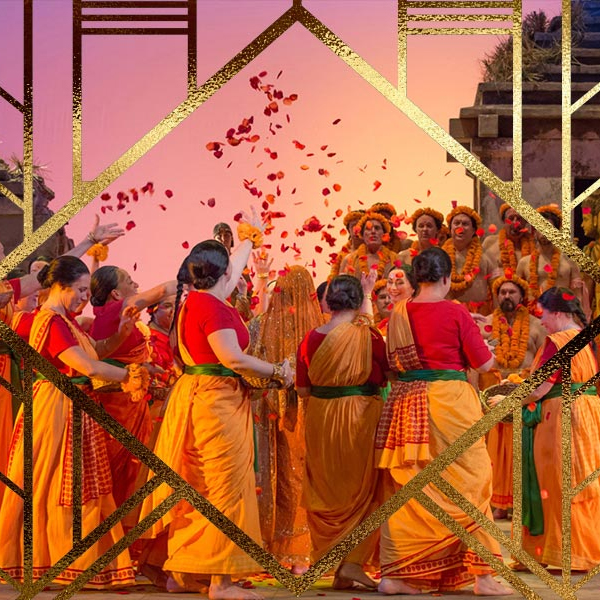 There are two performances left of this highly satisfying production: Thursday 17 and Saturday 18 May. Note that curtain up is at 7:30pm, so don’t arrive for an 8:00pm start like several did last night thereby missing the exquisitely beautiful and iconic tenor-baritone duet Au fond du temple saint (which translates as In the depths of the temple).

The latecomers missed an absolute treat. Baritone Grant Doyle (as Zurga) and tenor Andrew Goodwin (as Nadir) combined to produce an exquisitely balanced performance of In the depths…, and both owe a debt of gratitude to conductor Graham Abbott for setting an ideal pace and dynamic acoustic landscape that perfectly complimented their voices. There have been more vibrant and vocally powerful renditions but none have been sweeter or more heart felt.

Bizet’s The Pearl Fishers is a pleasing opera, but it does stand in stark contrast to Bizet’s other well-known opera Carmen and does not obviously plumb the same depths of emotion. However, it includes some sumptuous orchestration and many memorable lyrical melody lines. Abbott, who is one of Australia’s finest musical commentators and music makers, provides some deep insights in his program notes and comments that many of the harmonies attempt to evoke the mystical East and are “intriguing and delicious”. With that understanding he extracted the very best from the Adelaide Symphony Orchestra and breathed freshness and new life into the score.

Director Michael Gow chose to set the opera in the times of colonial Europe. Unlike many attempts at ‘updating’ the setting of an opera, this reimagining works quite well, but is probably unwarranted. As expressed in the program notes, the rationale for it is more academic than inspired. At times Gow’s direction was a little uninspired, with a number of ‘stand and sing’ scenes.

Robert Kemp’s set was constructed on a grand scale and evoked the sense of a colonial garrison located in Ceylon with local indigenous influences. Zurga and Nadir were played as colonials while the other principals and members of the chorus were costumed as Ceylonese.

Matt Scott’s lighting was a highlight of the show, with compelling effects of seascapes, starry nights, tropical storms and fiery infernos.

Pelham Andrews played Nourabad with requisite menace and the audience was never in doubt that he was the ‘baddy’.

The standout of the production, apart from Abbott’s masterful control of the mighty Adelaide Symphony orchestra, was soprano Desiree Frahn in the role of Leila. Every note she sang soared from the stage like a graceful bird on the wing. Nothing was forced, no wasted tremolo - just a beautiful purity that was in perfect empathy with the character she was portraying.

This production is definitely worth ‘taking in’. Whether you are opera-curious, or a seasoned opera connoisseur, this production offers much.