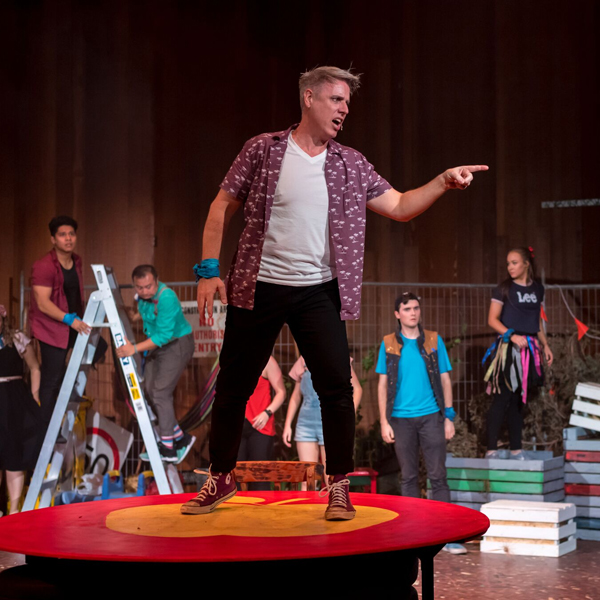 Irregular Productions and Lydian Productions. The Parks Theatre. 12 May 2018

I do not consider myself to be religiously inclined. In fact I would go so far as to say, the thought of being preached to about any form of religion makes me feel quite uneasy. It is then, with some trepidation that I front up to the 2011 revival of Godspell. The show, which is playing at The Parks Theatre, has been produced by Irregular Productions and Lydian Productions and is directed by Karen Sheldon.

Godspell is a musical originally conceived and directed by John-Michael Tebelak with music and new lyrics by Stephen Schwartz. It is based on a series of parables mostly taken from the first book of the New Testament – the Gospel of Matthew. However, for reasons partially outlined above I will avoid comment on the structure or nature of the show’s content.

Presented on a thrust stage, The Parks theatre offers a unique and engaging staging opportunity for a show about community and inclusion. The scenic concept by David Lampard, with set painting by Brian Budgen, places the action in a public space, perhaps at the back of some project housing. In this place we find the everyman, but more specifically a youthful and vibrant bunch of enthusiastic disciples. At the centre of the round, a large circular platform surrounded with an eclectic selection of chairs doubles as both rostrum and a table. Radiating out and into the auditorium the play space continues; the performers occasionally presenting from amongst the audience, including us, and even drawing a few of us onto the stage.

The prologue, Tower of Babble, doesn’t immediately settle one’s fears. Enter Joshua Angeles as John the Baptist singing Prepare Ye. His voice chimes clear as a bell on the lyric and he commands attention from atop a raised railing overlooking the stage. When Mark Oates, as Jesus, begins to disseminate his first parable this production shakes off the predictable religious conformity, and begins to celebrate the power of community. Inclusiveness and accessibility is suddenly made possible by well-structured humour. Godspell is actually funny, and not afraid to make fun of itself.

In what must have been a coup for the production team casting this show, not one of the players delivers anything short of a professional performance. From the aforementioned Mark Oates and Joshua Angeles (who also plays Judas), to the stunning cast whom all play themselves; Harry Nguyen, Nick Munday, Jemma Allen, Ron Abelita, Katie Packer, Ruby Pinkerton, Maya Miller, and Scarlett Anthony. Each and every performance sets, and maintains, a professional standard in a truly ensemble presentation.

There are standout moments worthy of mention. Maya Miller’s rendition of By My Side is sung with stunning control and absolute belief and transcends in the three-part harmony with Jemma Allen and Scarlet Anthony. Mark Oates' gorgeous performance of Beautiful City is a pleasure to the ear. But props go to Ron Abelita’s entire characterisation which is so endearing, and charmingly constructed that is sets a tone for the rest of the cast, not to mention his impassioned performance of All Good Gifts.

In fact, everything about this show – from staging to lighting, from choreography to sound, and from musical direction to performance – is of an exceptionally high standard. This show is an object lesson in the professional levels an unfunded, amateur production can attain. Bravo!

Kerry-Lynne Hauber’s choreography is so clever and effective it blends effortlessly into the other production elements. Utilising the entire space it beautifully communicates the feeling of a community united in celebration and love. Martin Cheney’s musical direction is superb, and with band members spread all around the room it is thanks to Jamie Mensforth’s brilliant audio design and management that such a professional balance of cast vocal and instrumentation is achieved. Brad Sax’s lighting design takes full advantage of the Parks' superior rig and again heightens the professional standards of this overall production. The fairy lights, however, are unnecessary and distracting in the crucifixion.

Godspell tells a well-known story – I don’t think I’d be spoiling it for you to say that Jesus dies in the end – but it takes a new and welcome approach to the content which makes it accessible even to those who don’t identify as religious. This production takes a pretty decent show and delivers it at such a professional standard, that it should not be missed. If you are feeling the same trepidation I was, shake it off and take a ‘leap of faith’. This Godspell is worth it.

Where: The Parks Theatre