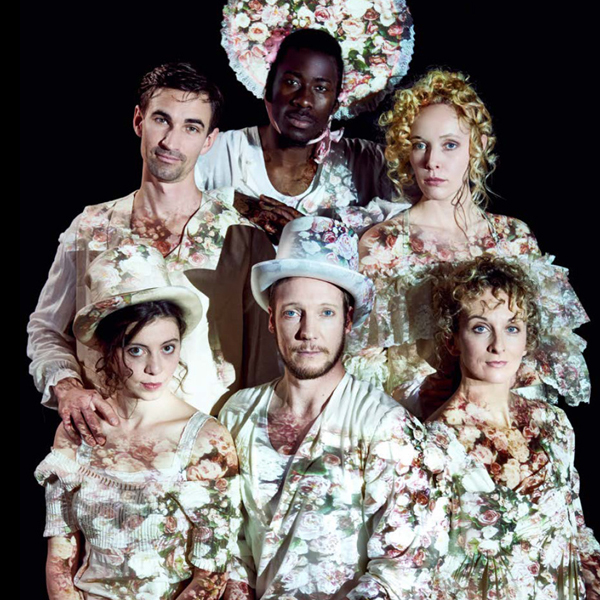 Sense and Sensibility is sensational! Artistic director of State Theatre and director of this production, Geordie Brookman, and his ensemble cast with a few guests, make this old chestnut an absolute joy to behold. American Kate Hamill is renown for her witty adaptations of classic novels. Sense and Sensibility was first on the boards in 2014 in New York. She followed it up with Pride and Prejudice last year, and The Wall Street Journal awarded her Playwright of the Year in 2017 for her efforts.

Jane Austen wrote both these extremely popular and now-quaint bonnet dramas in 1811 and 1813. They similarly involve a bevy of beautiful daughters without dowries, who thus require men with means - but may settle for less when love conquers all. There are loads of characters moving in and out of the girls' lives and while I have been too dull to read either novel, I did a bit of homework and drew up a relationship chart based on information from Wikipedia. I kept my schema on my lap during the show - much to the amusement of the nineteen-year-old daughter of a friend of mine who accompanied me, as she had actually read the novels. PS She loved the show!

So why was this production so great? Well, everything really. Hamill's script is cheeky and whimsical, and captures the sweep and detail of the action, and it couldn't be done in under two hours-fifty, but that's OK when you are enjoying yourself. Designer Ailsa Paterson provided a set very similar to the recent Hamlet opera, a large high-panelled ballroom-size room with a feather chandelier. The soft pastel wall colour magically transformed vertically into another moody hue, and yet even more colours were rendered by Geoff Cobham's brilliant lighting. The period costumes were also colourful, crisp, varied and very stylish. Theatre magic and the understated humor of the production was established in an early scene - the first meeting of Edward Farrars and Elinor - where chairs pushed from offstage slid like curling stones across to floor to cease motion at exactly the right place next to table. There was even a gasp from the audience. Bravo stage crew! Stuart Day wrote novel arrangements for a few bars of modern tunes that reflected the mood of the love-struck in scene changes.

As great as the aforementioned scene was from a creative and performance point of view, it was but a mere appetizer of the absolutely lovely acting from all players - each manifested a major and one or more minor roles, participated in whacky scene changes and also impressed as bonneted ancillaries. Homegrown Nathan O'Keefe was a study in understatement as a delicate, sensitive and nervous Edward. Bravo! Anna Steen, as the object of his affections, Elinor, beautifully suffered with unrequited love and disappointment. Bravo! The State acting ensemble also includes Rachel Burke, Miranda Daughtry, Rashidi Edward and Dale March. Burke gave an impetuous, pouty and immature Margaret. Daughtry as the strong-willed Marianne provided an excellent contrast to her older sister, Elinor. Edward was an elegant and charismatic Willoughby, and March an introverted and stiff Brandon. All bravo! The ensemble was augmented by sturdy stalwarts of State's stage - Caroline Mignone, Lizzy Falkland and, last but not least, the always amusing Geoff Revell - who all made the most of several characterisations. Bravo to all of them!

But they wouldn't have looked as good as they did without director Geordie Brookman's tight rein on style. His vision was clear and crisply executed with regimental precision.

If you said you would never go to a State Theatre show again after sitting through their Festival offering - the dark, heavy-handed, unimaginative and cliché-ridden In The Club - now is the time to return. Sense and Sensibility is a must-see.