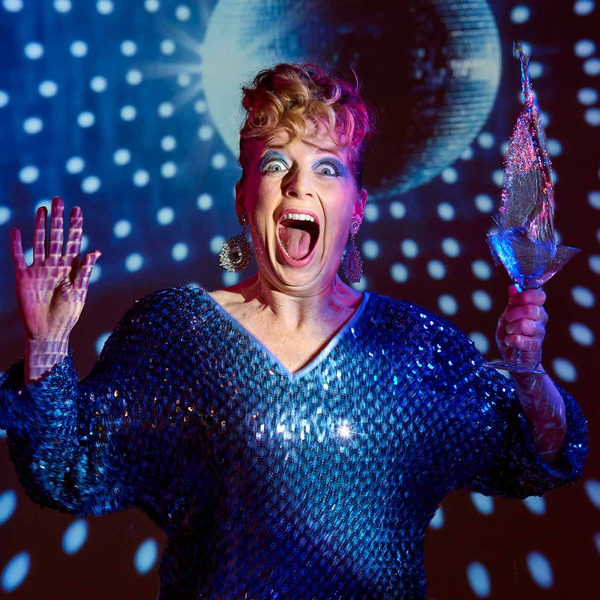 Methinks the boy has a future.

After Dinner is a beautifully crafted play which falls somewhere between farce, comedy drama and tragic comedy.

Every which way, it is gorgeously funny while at the same time it is piercingly and memorably poignant.

It is a study of classic Aussie characters drawn by the playwright as stereotypical but not clichéd. The play is set in 1988 in a suburban pub or club wherein dinner is only served to tables at the back of a room where a band plays Friday night gigs. Designer Jonathon Oxlade ruthlessly creates a classically bland hospitality wasteland. Just one lacklustre quasi-Pro-Hart print relieves the big, boring wall. The room is fitted with utility tables and chairs. These were the drab venues in which singles made their desperate search for partnerships in the days before online dating.  Blokes went to chase a bit of skirt. Lonely girls went in hope.

Dympie is a bit on the OCD side and she is keen to be early to secure a favoured table not too near the bar and the band. She likes to ensure that everything, including her work friend Paula, fits into her neat, tidy and judgemental comfort zone. The well-known actor, Jude Henshall, is unrecognisable within the guise of twitchy, bitchy Dympie.  She is a mass of well-observed mannerisms; sour, smug and manipulative. Her friend, Paula, is a would-be free spirit who always ends up succumbing to Dympie’s passive-aggressive bullying tactics.  As Paula, Ellen Steele somehow makes her eyes seem eternally startled. In itself, this is funny. Indeed, Steele shows very fine form as a physical comedienne and evokes a character one comes to cherish.

On this Friday night, the two girls have invited their recently widowed friend Monica to join them. She’s late.

At a nearby table Gordon waits alone, toying with the table setting, drinking water, reading the absurdly large menu, failing to get the waiter’s attention and killing what seems to be a lot of time. He is a very beige man. He is played immaculately by Rory Walker and as the play opens, he is positively Tati-esque in his uncomfortable relationship with his surroundings.

The characters emerge through banter and small personal outpourings. In Monica’s case, it is right over the top and into suspend-your-disbelief territory as she throws off the weeping widow image. Elena Carapetis is delicious in this wild ride of a role. Then again, under Corey McMahon’s astute direction, comic timing is right on the spot throughout the production and all cast members are bloody funny.  There’s lots of physical comedy with lovely old suggestive shtick. Then there are the misunderstandings and cross purposes in which the hilarity escalates to produce rewards of rib-aching laughter.

Bovell clearly watched carefully that life of the lonely-hearts losers in the 80s.  He has drawn them with a pen that is both cruel and compassionate.

Patient menu-gazing Gordon is finally joined by his mate Stephen - to which end Nathan Page, the TV heartthrob of Miss Fisher fame, bursts upon the stage all tousle-haired and louche. If all Gordon wants to talk about is his failed marriage, Stephen just wants to suck down the booze and engineer a one-night stand. Unmarried and in his 40s, such brief encounters are all he knows of relationships. Page’s performance as Stephen is sublime.  He makes one love that eternal predator and, by play’s end…

Ah, let’s not give away some of the twists and turns of this beaut Aussie play.

Let’s just be glad that Bovell wrote it and sad that it is not produced more often.