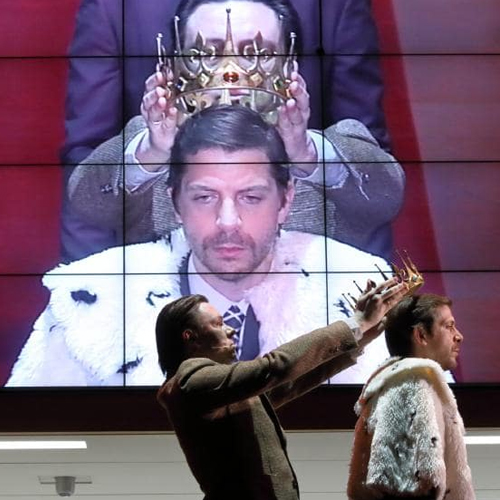 Foolish are we to associate the word “royal” with nobility, glamour and privilege.

As the Dutch Toneelgroep theatre company ropes Shakespeare’s king plays together, it is to remind us for once and for all that the Royal Houses of English history are an ugliness of ruthless ambition and power politics.

Their Kings of War production, a breathtaking centrepiece to the Adelaide Festival 2018, is an epic saga of unadulterated regal awfulness. From five of Shakespeare’s plays, it focuses on kings Henry V, Henry VI and Richard III and the machinations not only of their ruling eras but of the dukes and earls and cousins and the seething pits of conspiracy and ambition of the royal courts of yore.

Toneelgroep places these plays in a contemporary landscape upon a massive open-plan set which features bleak corridors leading behind the scenes to power-plays, deaths and vignettes of loss. Onstage centre is a giant screen on which happenings on and off stage are depicted. There’s a cameraman amid the action a lot of the time and his images loom large on the screen. Sometimes there’s a mystery of where on earth is the camera? The film images keep coming. The camera tracks deaths of kings behind the scenes, always laid out in white on a hospital gurney emphasising the great anonymising equaliser of death.

The kings and their court are in modern garb - the same dark suits and ties which define male power today. This underscores the grim reality that, while the nature of wars and political sabotage may have changed some, the essence of their loathsome power games has gone on and on and the perpetrators notoriously are male. These Kings of War are long dead but new kings of war are out there now.

Hello Trump. Hello Putin. Indeed, in a rare light moment, Richard III takes a break to give them a quick tingle on his royal telephones.

The staging itself is clever. There’s a war room in one corner. Another one is over there. There are musicians boxed aloft to sound horns of war and pomp and mourning. There’s a bed which is a royal chamber or barracks, there are war maps and, as scenes and periods move on, there are war tables and lounge settings. And, of course, most importantly, there are the surtitle screens - one over the video screen and another above the stage itself because the actors are speaking in Dutch.

This makes the four and a half hours gripping not only in terms of the action evolving onstage but because the audience must be reading very swiftly and at the same time watching the players, most of whom are look-alike men in suits. It requires quite intense concentration.

Of course, there are women in the plays too. They are high-born but also chattels of political power. Henry V might be besotted by Katharina but it is her father, France’s King Charles, who decides her marital fate as a tool of national diplomacy.

The wooing of Katharina is one of the sweet moments of the production. It’s a lovely piece of gruff romantic ineptitude by Ramsay Nasr as Henry; a bit of language comedy. And in positive terms, it symbolises two royal houses seeking peace after the ravages of war, of kings healing wounds for the sake of their people.

The modern war reportage style employed by the production works brilliantly; its showing of Henry V’s incursions into France have particular impact. The maps are projected onto the screen and one sees the Battle of Agincourt as if on CNN. The audience gasps as the death toll is posted: 10,000 French, 112 English. The descriptions of the battles are graphic. Put your babies on spikes. Fighting men tired and dirty. And amid it, bursts of Shakespearean thought, philosophising the tragedy and cruelty of war, and delivering chilling sentiments in exquisite poetic expression.

While the liberties in the adaptation of these Shakespeare plays are legion, not to mention that it is spoken in that wildly guttural other language, director Ivo van Hove has retained a sense of integrity for the beauty of the Bard’s use of English.

Henry V dies young of dysentery just after he produces an heir and that baby is raised by the court and a regent. He takes the throne the moment he is old enough but he is never mature enough. Eelco Smits plays young Henry VI as a poor, nerdy, insecure weakling. His grief over the murderous death of "Uncle Gloucester” is heart-rending. He has violent fits and is inconsolable. While the squabbling wheelers and dealers of his Royal court run the show over his head, he takes support from prayer. Poor little Plantagenet.

Richard III is played by Hans Kesting, and oh, how masterfully. In this production his disfigurement is a dramatic port wine stain across his face and an awkward gait. Cursed “by dissembling nature”, he says.

It may be the winter of his discontent, but his royal court has been modernised and has Persian rugs, couches and plants. The household views the world on the television and eats jam tart. And there is another surprise show-stopper scene - the silent eating of the very tough tart.

The murderous world goes on. The princes toddle off to the tower. The music moves from horns to DJ effects to a counter tenor singing solo to thunderous rumbles and mad metronome. “Where will it end,” it choruses. The soundscape is as striking and original as the mounting of the work.

And Richard, reviled, devious Richard, goes mad and bounds around. “My kingdom for a horse”. The royal world is bedlam.

Kesting’s portrayal of Richard is endlessly interesting and, thanks to the close-ups enabled by the camera work, the audience can see right into his eyes as he talks to himself in the mirror. One shares in his self-pity and self-hatred.

Toneelgroep brought us the sensational Roman Tragedies in 2014, an epic about which people continue in their effusive praise. Kings of War is not on its vast scale but it is nonetheless an extraordinary feat of theatre.

It is another of those very special theatrical experiences for which we love and thank our Festival of Arts from the bottom of our hearts.