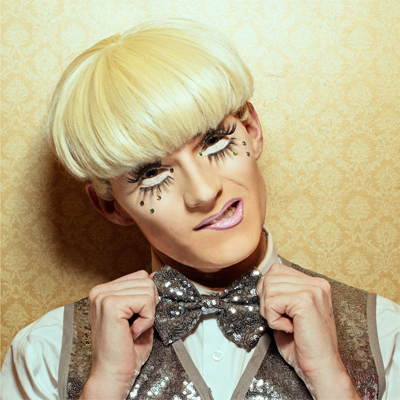 Help! I Think I Might Be Fabulous is a highly recommended uplifting, biting, and oh-so-funny show about self-affirmation and the joie de vivre that can come from being true to one’s self. It leaves a smile on your face that is still there long after the show is over. It’s completely feel-good!

Alfie Ordinary is anything but ordinary, he is ‘fab’! ‘Fabulousness’ is of course knowing your own strengths, appetites, limitations and reasons for being alive, including being ‘out’ if you are ‘not out’, and then proudly and passionately living that way all the time, rather than suppressing one’s real-self for some or all of the time.

Alfie takes to the stage dressed in costumes that have consumed nearly every sequin, splash of glitter and eye-lash left in Australia, and it would have been difficult to find any with Mardi Gras having barely been put to bed for another year. He announces cheekily that he is the son of a drag queen which makes him a drag prince, and from then on the laughs come thick and fast!

The show can almost be described as juke-box musical for a solo performer. Not far below the surface of the hilarity and hilarious antics there is a serious narrative, and the songs that Alfie sings, or are sung by guest stars Whitney Houston and Bette Midler in the form of gorgeous and side-splitting puppets, become part of the story.

Deservedly, this is an award winning show, and it is one of the best hours one has spent at the Fringe. Don’t hesitate to see it yourself, and enjoy the ambience of Fringe across the river at Pinky Flat. (Warning: It’s a cashless society at Pinky Flat, so take a card if you want to buy a Pimms or a G&T or a …)