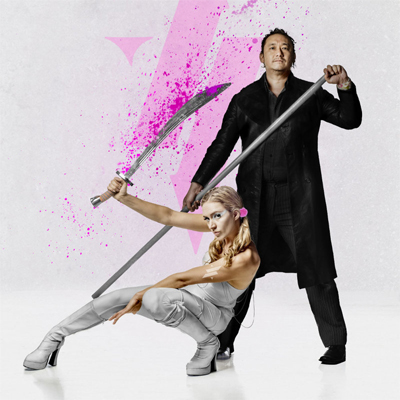 Social activism, politics, varied media and popular culture of many modes have commingled as long as humans have created social structures. Anya Anastasia’s The Executioners is one sharp and very subtle satirised blend of such elements in our times, built to leave you seeking the genuine article from cravenly false bullshit.

She is engagingly smug. A bitchy songstress of popular causes against the eroding influences of social media, climate change politics, people power, freedom movements – you name it, she’ll have a rant to fit. Yet this star is as trapped by the alluring dangers she sings against, as much as she figures herself an executioner of evils. At the forefront of her, is her iPhone with torchlight on, shining the light on her and the audience in modern collective solidarity, supported by an iPad attached to the microphone stand. Social media sharing in collective algorithmic ensnarement.

But behind the extreme modernist front, exposed through costume and fantastic film projection work by Underground Media, lies the music and in that, the trick of this production if you know your history.

Listen closely. You’ll hear the styles of folk and 60s protest songs written for piano, ukulele, and piano accordion along with the lilting strains of the peace movement embodied in the sitar. You can’t pick a song of the era, but the style Anastasia links her cracking lyrics to is unmistakable.

This tack brilliantly marries past and future takes on politics in which the urgent heartfelt, blood-and-sweat, passion infused activism of the past meets socially pretentious and selfish causes rallying of today.

This is one show political junkies with a cause to scratch definitely need to see, and embrace its musically sharp one, two, jab right, upper left, to flaky activism.

Where: The Lab at Queens Theatre