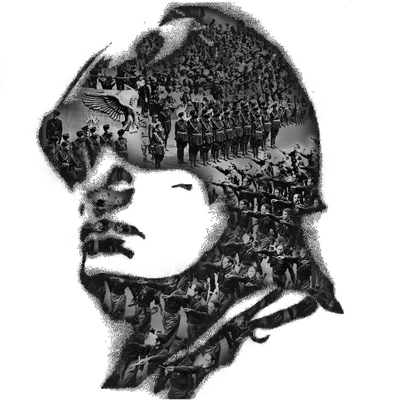 Grist To The Mill Productions. Studio at Bakehouse Theatre. 23 Feb 2018

In the vein of Tom Stoppard's Rosencrantz and Guildenstern Are Dead, Gratiano sees one of Shakespeare's minor characters catapulted into the limelight and given the opportunity to tell the story from their point of view.

The piece is a one-hander written and performed by Ross Ericson.  Ericson delivers a sequel to The Merchant of Venice where the irreverent Gratino is the main event.   Shakespeare's characters are transplanted into Mussolini-era Venice where, three hundred years later, the same echoes of antisemitism are being used to turn a country against itself in the lead up to the Second World War.

Gratiano, chatty and flippant in his original form, is reinvented beautifully as a cockney gangster.  Inside a police integration room, he is being questioned over the recent murder of Bassanio.  Suspected of having a hand in the "unlawful killing", Gratiano protests his innocence to the unseen Police Inspector and in the process, reveals his tale.

The show’s first half stays within the boundaries of the play and we are treated to Gratiano's take on the characters and their motives.  It is engaging and funny.  The script is skilfully written in Shakespearean verse and done justice by Ericson's brilliant portrayal.  He masterfully delivers the complex dialog whilst embodying the cheek and cocksure swagger of an old school London mobster.

As the play progresses, it steps beyond the close of Shakespeare's piece and this is where it truly shines.

Ericson's characterization never falters and he breezes through a number of obvious lighting blunders with complete professionalism.   He keeps you engaged throughout.  The sparse set provides everything required, which is virtually nothing other than Ericson himself.

The production cleverly modernises Shakespeare and provides a different and very engaging slant on one of his better known plays.  Much more than that, it uses the play as a platform to explore the insidious nature of institutional racism.  Ericson shows how it can linger through generations, easily manipulated by an isolationist agenda and capable of inciting horrible acts of callousness and indifference.

The Merchant of Venice is the vehicle through which Ericson tells a much bigger and more culturally relevant story.  If you are just looking for a new look at Shakespeare in this piece, you will be disappointed and miss its true strength.

Through Gratiano's own realisations, Ericson portrays the personal cost of standing aside and allowing bad things to happen to fellow humans: neighbours, colleagues, or even strangers.  A failure to move, to speak, to protest, leaves the bystander forever scarred.  Could such a person have the courage to right the wrong if a second chance at justice presented itself?  Could a society condemn them if they did?

Don't miss this one, its well worth it.

Where: Studio at Bakehouse Theatre