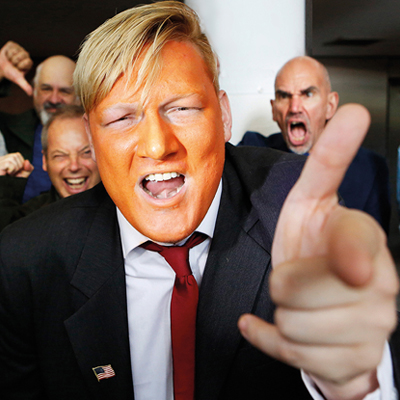 James Seabright. Campanile at The Garden of Unearthly Delights. 20 Feb 2018

How could you not want to see a show with a title like that? All the presidential trappings are there: red, white and blue lights, the American flag, the presidential seal on the podium, even a Secret Service agent. In the queue, the audience is asked for questions to ask the president, and indeed, he holds a couple of press conferences.

Fresh from a mid-winter UK tour reprising his show after consecutive popular seasons at the 2016 and 2017 Edinburgh fringes, Simon Jay got his Trump past Border Force and into the Garden of Unearthly Delights. Jay is a hell of an actor because he couldn't be more different than Donald. He was nearly driven mad-insane as his sexuality conflicted with expectations, and then he just got mad-angry and wrote about the experience in a show called, Bastardography. But his interest in theatrical satire of British politics long precedes the Trump era. Sex, angry, politics - hmmm - maybe not that different.

The show opens with some actual historical news footage from the campaign and victory on election night and a beauty of President Obama stating, "Trump will never be president. I have a lot of faith in the American people. The job is not a talk show." Famous last words.

Everything in this show is quite alarming. Trump has an orange face with purplish shading - rather ghoulish and signifying a hyper energetic man. Jay, in spite of his gravelly voice, puts on a terrific effigy of Trump with mastery of his mannerisms and body language. It's very easy to believe you are in the presence of the potent president, complete with his vulgarity and disdain for the different.

During the 'press conferences’, and throughout the show really, Jay is as quick-witted as the real deal with the snide put-downs and ridiculous twitter-like comments. When asked a question on global warming, Trump manically bursts out laughing, and on whether he has had Hillary over for dinner in the White House, he replies that she is only fit to houseclean it.

What we also see is the Trump that was exposed during the campaign but largely unseen - his licentious behaviour gets plenty of exercise, as well as child-like tantrums. Even the most ridiculous thing Jay's Trump does seems plausible.

In fact, Jay's Trump was so good, he ran into a problem. I dare say nearly all of the audience in the show I attended strongly dislike the man, and Jay's impersonation was so successful that many people requested for audience participation were uncooperative - and somewhat sabotaged the proceedings - because they didn't like being in the presence of even a make-believe Trump, and wanted to screw him up. No worry, Jay had plenty of Trumpisms to fight back with. The Secret Service agent wasn't up to scratch, and the moralistic plea for righteousness and fighting fascism was out of left field and didn't work.

Very impressive, high energy and very funny. The only danger is it's too real and at some point your head's still laughing but your heart starts crying.

Where: Campanile at The Garden of Unearthly Delights