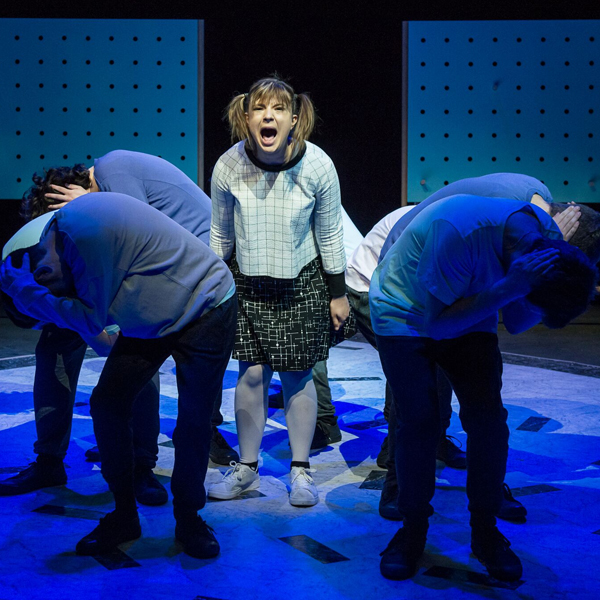 She is ‘Nameless’; unnamed for the difficult child who does not seem to fit in and worse, ahead of the kids in her class by a long shot she knows more about Einstein and Isaac Newton than a kid her age probably should. What are her parents, teachers and class mates to do with her? How to deal with her and her antisocial behaviour at home and school?

Welcome to the world of a child on the autism spectrum from Company AT (Autism Theatre) in a production cast with actors on the spectrum and in collaboration with other artists with a disability from Tutti Arts.

Emily Steel’s script created in collaboration with the cast is rich in frustrating moments across the board; ‘nameless’ only wants pizza for dinner, can’t handle an over-crowded class room, or understand why her classmates treat her as they do. Her parents are at their wits end.

Naming this highly intelligent girl’s ‘skewed’ reality and realising how to manage the unique gifts of one on the autism spectrum is at the core of this hugely entertaining, thought provoking and richly rewarding theatrical experience, three years in the making by those on the spectrum.

A focus on comedy with a very light garnish of music theatre is the essence to the production’s success, handled superbly by Kaila Pole as Nameless, Michael Need as Newton and Mikhael Crossfield as Einstein, and beautifully built upon by the entire ensemble.

Impersonal Space is filled with life, liveliness and wonder, gifted by the serious smarties of our world who need a bit of extra attention and understanding so they can unleash the magic in them, a magic universal to us all.