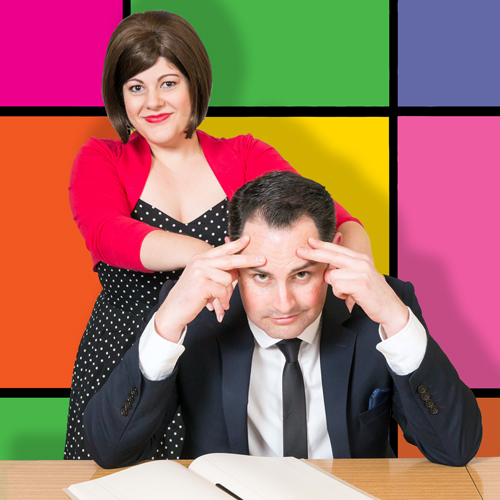 Blend the solid production standards of The Met with an evergreen lots-of-fun musical and you have a winning night of exuberant delight.

For the new generation, Bye Bye Birdie explains the source of a string of familiar popular songs - A Lot of Livin to Do, Kids, Put on a Happy Face, How Lovely to be a Woman… And it brings to life the rockin’ 50s with its full skirts and Elvis mania.

Birdie is based on the phenomenon of super-star Elvis Presley being drafted into the army in 1959. It’s the rock icon's grand farewell as conceived by his hapless manager, Albert Peterson. The idea is that an ardent teen fan is to be chosen as recipient of the singer’s last kiss. The whole show, from Michael Stewart’s book with lyrics by Lee Adams to Charles Strouse’s music, is a good-natured spoof and a send-up of teen hysteria; what turns it on and what oldies make of it. It is also a comic love story of a would-be English teacher and oppressed mother’s boy finding himself out of his depth as nothing goes to plan. That these ingredients are well wrought is the secret to the enduring popularity of the show - and, perchance, the show’s creators would be well pleased with The Met’s presentation.

It’s not Broadway but director Gordon Combes has delivered a production which is slick and clean and tight. Carmel Vistoli’s choreography is simple and good, the ensemble work is tight, the harmonies terrific, the costumes bright, the stage design sharp, the lighting spot-on, Paul Sinkinson’s orchestra is sweet on the ear and the timing and the spirit of the show is energetic, hammy and effervescent. If one had to insist on finding flaws, one may have found a couple of slow scene cues on opening night - but hardly worth noticing.

The principals all hold their own and hit the right notes. Giulia-Giorgina Condoluci is ardent, avid and athletic as Kim, the number one fan, with Russell Ford very strong as her long suffering father, doing vocal justice to Ed Sullivan and Kids,  and sweetly supported by Di Mason as the wife and Harry Ince as the kid brother. Matthew Pugsley slicks his hair and struts his stuff in sly Elvis style as Conrad Birdie and when he opens his mouth and sings his main songs, Honestly Sincere and One Last Kiss, he turns on his true star quality.

Celeste Barone works relentlessly hard in her huge and demanding role as Rosie, Peterson’s devoted assistant and wannabe wife. With a voice stronger than melodic but with masses of chutzpa and lots of pizazz in her dance, it’s a winning performance. Jenny Bowen, rugged up in scruffy furs as Peterson’s overbearing mother, has all the best lines and martyr-mother gags and gets the best laughs of the night.

But the night belongs to her nerve-racked boy, Albert Peterson. His is a huge song and dance role with endless reactive comic shtick. It carries the show. And Paul Rodda, always a delight to watch in dance, hits all the right notes in the score and, from fool to misty-eyed romantic, he delivers the showbiz goods in his best performance to date.

Where: The Arts Theatre

WRITERS NOTE:  While I work with Paul Rodda as a senior critic on this website, my ethic is “no fear or favour”. Had Rodda’s performance been less than excellent, I would have said so or excluded his name from the review.

EDITOR’S NOTE: Paul Rodda who plays the role of Albert Peterson in this production is the Editor and Creative Director of the Barefoot Review.