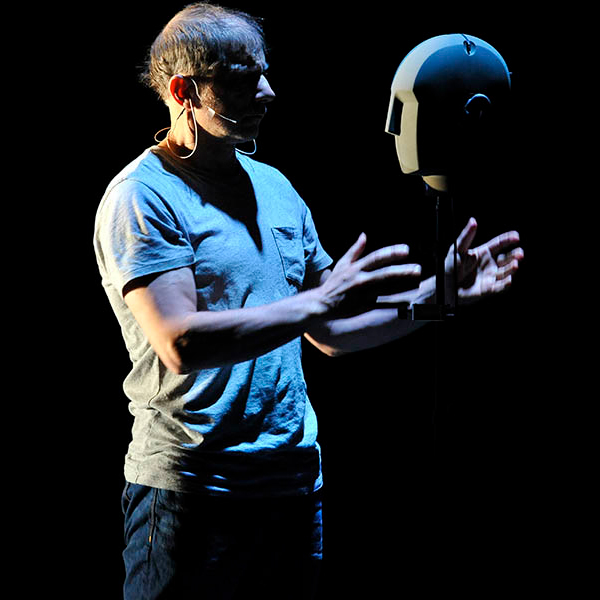 Richard Katz’s voice travels round and round in one’s head beneath the headphones. Is he behind me? Ooh, he is blowing in my ear. My ear feels hot. How could it?

It is a perceptional illusion. A trick of the mind. An alternative reality. And what is reality, anyway?

Katz riffs on existentialism moving around the stage which is his London studio. The vast sound-absorbing foam baffle curtain stands behind him. A binaural head stands before him. His five-year-old daughter comes and goes in sound bites we are hearing through our headphones. He’s babysitting. She does not want to go to sleep.

But, he has a story to tell.

There is a table with more microphones, a chair and a lot of plastic water bottles. He introduces the deep American voice of the protagonist, Loren McIntyre, the National Geographic photojournalist who is taken to the Brazilian Amazon to find and record the mysterious Mayoruna tribe. The story begins.   Just Katz on stage and us under our headphones. One on one. Five hundred of us... It feels like a radio play on steroids. A boat plane over the river. Sound effects. Voices. Jungle.

Things do not go to plan. Loren follows the tribe into a strange half-village, half-world. He is not a prisoner. Or, is he?

Only the head man can communicate, but it is telepathic. The American is sceptical. Village life, tribal plans, white invaders, the jungle, flesh-eating maggots… The set is dark. There is just Katz up on stage, running around in the dark talking, gesticulating, adding his voice to the layered soundscape which is filling our brains. There is no other reality.

The story unfolds. It is scary and gruesome and yet wonderful. Strange substances are consumed. Altered states. One thinks of Carlos Castenada and The Teachings of Don Juan. Eek he is now licking a psychedelic frog. Loren’s predicament is extreme. Katz, meanwhile, is still babysitting in London.

The two worlds whiz by all contained between the ears.

The sound quality is excellent. The sound technology is superb. The performance is almost superhuman.

This is Simon McBurney’s Complicite. His production is based on a book, Amazon Beaming by Petru Popescu. The book is based on a true story.

It makes for a profoundly different experience, a truly Festival-worthy experience which comes in through the ears and imprints upon the mind’s eye.