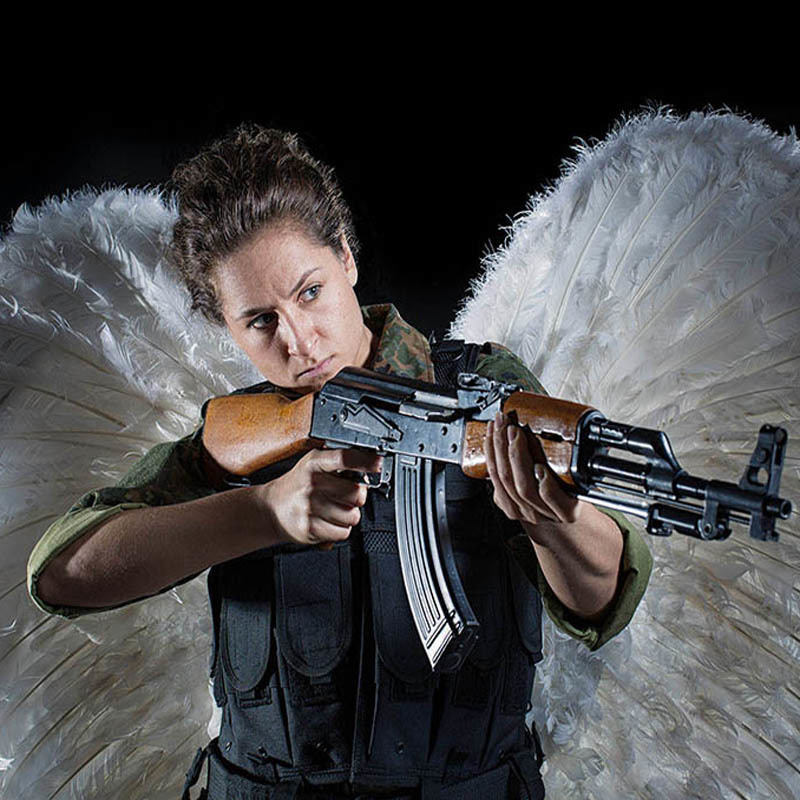 I'm a sucker for a play with a poster photo of a girl with a Kalashnikov and angel wings, but there are much better reasons to see English playwright Henry Naylor's Angel. Unfortunate you if you didn't see Naylor's Echoes in last year's Fringe, which won the BankSA Best Theatre Award. The show you're not going to miss this year - and which may win the BankSA award again - sold out in Edinburgh and won that festival's Fringe First Award. The Times in London nailed it onto its UK's Ten Best Plays list for 2016. More importantly, Angel won Holden Street Theatres Edinburgh Award, which means theatre impresario Martha Lott thought it good enough to help bring it to Adelaide.

Angel is the third instalment of a trilogy entitled Arabian Nightmares - Echoes being the second. A hallmark of at least these two productions is the painstaking research apparent in what might be called historical docu-drama set within the present and past conflicts of the Middle East. Another common theme is Naylor's uncanny ability to write intimate stories about women that seem to ring true with women (I had to ask around about this last bit). Whereas Echoes was a comparative study of the harrowing experiences of Victorian women joining the British occupation of Afghanistan, and western jihadi tale. This is the true-in-the-main-points-but-drawing-on-others's-contemporary-experiences biography of Rehana, who by circumstances is compelled to convert from pacifism to fight with her Kurdish comrades against ISIS during the latter's siege of Kobane in northern Syria in 2014.

The young Rehana is a cheeky child and then earnest law student dancing to Mariah Carey and imbued with the utopian dreams of Star Trek. The conversion of this innocence to the famous yet reluctant sniper is an absolute marvel to watch. Theatrically couched with exciting Lara Croft adventurism, actor Avital Lvova leaps away from bombed trucks and is thrown by mortar blasts, strips machine guns blindfolded and escapes rape attempts. She encounters - and superbly performs - a panoply of family, friends and odious foes along the way. It might be easy to get lost in the video game visuals of the action, except that Lvova emotionally brings you back to the visceral story - none of these characters leave this play alive. They die the horrible deaths of war, often after much suffering. And as Rehana actually did compile over 100 kills, this reality hits you like swamp gas and takes your breath away. A bit of her dies with every kill and Lvova makes us feel it. Bravo!

Naylor has written another exceptional play and tosses the distant war of the Middle East off the television right into our lap, still bleeding. Another Bravo!