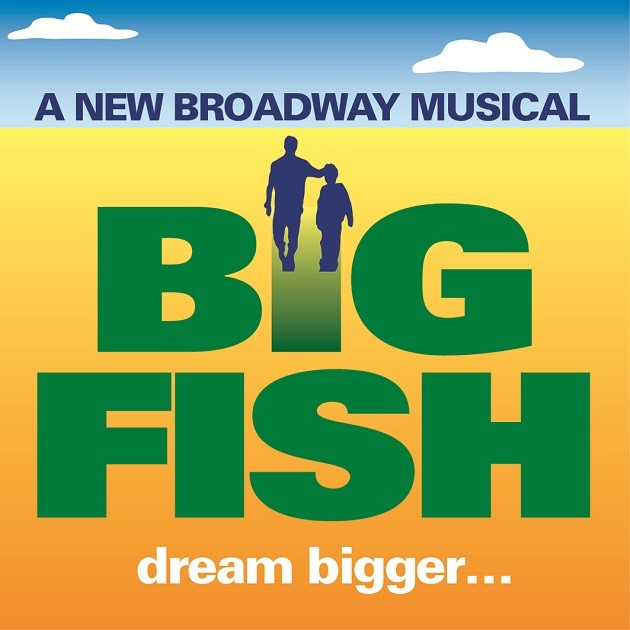 Big Fish is big business in so many ways. The story has its origins in Daniel Wallace's 1998 novel. Then it was a Tim Burton film in 2003 and finally we see here the Broadway musical of 2013. Therry puts on a big show with a cast of 28 and easily triple that including the creative and production teams and the orchestra. The set (design uncredited) is a work of modern art. And there is a cornucopia of extravagant characters. (The action takes place mainly in some previously unheard-of part of small town Alabama where black Americans are not extant.)

Being new to the story, I had no idea what was going on for the first 20 minutes and I loved it! A knee-slapping dance caused fish to fly out of the river. Then there is some witch foretelling the future of our hero, Edward Bloom, a la Macbeth. There is a bit of normalcy and then Bloom entices a giant out of a cave. And yes, there is a giant on stage! You learn that anything can happen in this show, as these scenes are manifestations of Bloom's imaginative parables. Turns out to be a very sweet intergenerational story and at the centre of the intrigue are the source of Bloom's fantastical stories and a son searching for his "real" father.

Actor Andrew Crispe very successfully invests Edward Bloom with goodness and country-style domesticity. His song, Fight The Dragons, playfully rendered with child star Oscar (someday winner) Bridges as Young Will, his son, was one of my favourites for recalling a young'un's yearning for adventure, and for father-son bonding. Rebecca Raymond plays Edward's wife with equal veracity and wonderful voice. Bravo! Lindsay Prodea's Will Bloom spent a lot of time with a furrowed brow and annoyed with his father. He maybe should stick to the river of the play, as he was wobbly on the high Cs. Scott Nell was a wonderfully gentle giant - great deep voice and skillfully dancing on stilts. What a costume! There's a lot more - a mermaid, an entire circus full of performers, assassination attempts by blow darts, nothing is too far out.

The creative team comprising director Amanda Rowe, musical director Mark DeLaine, choreographer Kerry Hauber and lighting designer Jason Groves whipped their cast and crew into a proper good night out. There is evident a fantastic team effort to create the costumes and sets for a great number of very different outlandish situations. And did I mention Sandra Davis for costumes? Bravo!