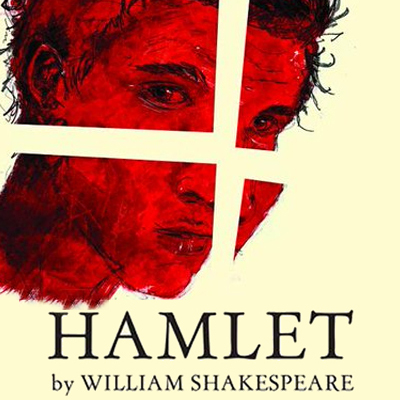 One can see that Denmark is on the skids the moment one enters the theatre. The stage is a huge, crimson disc with a rake like a hillside. Two medieval-style chairs sit beneath a shaft of cruel light. One can almost smell the impending doom. It's another brilliant Rob Croser and David Roach set which hints at the discipline and finesse which goes into an Independent Theatre production.

Hamlet is the longest of Shakespeare's plays but director Croser seems to have tightened it up so that its action thunders past. Swirling bursts of smoke reach out into the audience from this great raised stage. Actors shout and lines are fast.

Today's Hamlet is the acclaimed young actor, Will Cox. He is core to the current Independent ensemble.  Wiry, almost gaunt of form, madness falls upon him swiftly. He strides the stage in a slap of bare feet, one trouser leg rolled up to emphasise that he is well and truly awry.  He hollers and rails, sometimes right over the top. He's a nasty bit of work. But, when it comes to that great pinnacle of the "to be or not to be" soliloquy, he takes it lying down. It's a philosophically interesting angle which works well because that dramatic rake has lifted the actor into everyone's sight lines.

The supporting cast is tight; everything snappy on cues; a directorial sense of aesthetic ever-present in the plotting of the play. And among the strongest, out of the genre of song and dance theatre, rises Paul Rodda with a voice deep and rich and a delivery which sings of the King's English. He is an imposing Claudius. Bronwyn Ruciak partners him as Gertrude, aching with maternal restraint. Her death scene is truly heart-rending amid the chaos of conflict.

But it is Ophelia for whom the audience waits and Madeleine Herd does not disappoint. Exquisitely costumed in a simple, gold-edged gown, she brings to her mad scene the sweetest sorrow and despair. David Roach has never given a bad performance in his life. Here, as Polonius, he bestows his usual class and authority upon the production and, doubling up as the gravedigger, he performs from a very cleverly-devised cavity in the rake. It is here that Hamlet laments poor Yorik, caressing the skull, bringing forth effectively that thematic spirit of the frail mortal coil.

Sheldick Yarkpai embodies Hamlet's loyal friend, Horatio. His presence is fine and his voice beautiful, but his lines are hard to decipher. Rosencrantz and Guildenstern are played by Jordan Carling and Jett Zivkovic in a well-foiled partnership. The actors doubled in other roles, with Zivkovic giving a notable performance as Laertes.

And thus was Hamlet of 2016: striking in its magnificent lighting and design; beautiful in its finely-wrought costumes; and on the bombastic side in general tenor. Perhaps the shouting was too much. Perhaps the Shakespearean dialogue sometimes was gobbled. Certainly, as the players settled in to their parts and the opening night audience into those strange seats, the production found its feeling - desperate, wild, dangerous, and distressing, just as the author intended.

Reader's Note: Paul Rodda is Editor for The Barefoot Review