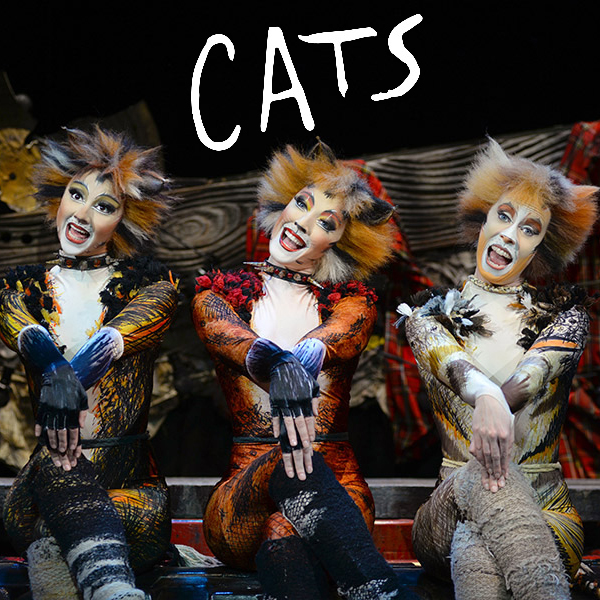 I love Cats; but it is well known as one of those love-it-or-hate-it musicals. It is easy to understand why… but amongst the well initiated, it is rare to find one who does not enjoy it immensely, or at-least sit in awe of the skill, talent, and sheer athleticism of the cast.

It is often said that the show has no plot – though this is of course not at all the case. The tail (pun intended) occurs on the one night of the year when a chosen cat amongst the Jellicles ascends to the Heaviside Layer to be reborn into a new life. As the Jellicle cats gather they notice they are being watched and decide to explain to the onlookers what a Jellicle cat is; The Naming of Cats. Victoria the White Cat (Jade Hui-Wen Coutts) performs a stunning dance that signals the start of the Jellicle Ball in The Invitation To The Jellicle Ball and the cats begin to speculate who might be chosen to ascend.

Munkustrap (Matt Edwards - swing) has a cat in mind, and introduces Jennyanydots (Holly Meegan) who fills her days and nights teaching the mice and cockroaches manners, music, crocheting and tatting. Edwards has a commanding presence, and towers regally over his Jellicle clan. Meegan leads a spectacular tap routine which instantly demonstrates the vast talents of the performers and kicks the show off with a huge injection of energy and life!

That is until Rum Tum Tugger arrives (Daniel Assetta), stealing the attention of the ladies, and doing as he pleases. Rum Tum Tugger has undergone a musical ‘update’ of sorts in this latest production, dragging it from its 80s, hip swinging, Elvis ways into a 90s hip hop, rap number – think of Will Smith’s opening theme in The Fresh Prince of Bel-Air.

This update doesn’t work, and traditionalists will be quite put off.

As the show continues we meet Grizabella the glamour cat (Delia Hannah), Bustopher Jones (Josh Piterman), and Mungojerrie and Rumpleteazer (Brent Osborne and Dominique Hamilton), each who impart their own catty tales before the arrival of the much adored and respected Old Deuteronomy (Jason Wasley).

Hannah reprises her role as Grizabella - a role she received a Helpmann nomination for in 2010 - and she returns with a much more mature interpretation of the glamour cat. Her performance of Memory is poignant, though at times, on opening night, rushed ahead of the orchestra.

Wasley’s Deuteronomy, despite being slighter in physical stature than his predecessors, is earnest and commanding in both voice and performance; more than compensating for first impressions.

After Munkustrap regales us with a tale of the Pekes and the Pollicles and the great Rumpus Cat, it is finally time for The Jellicle Ball; a spectacular dance break wherein the players deliver some of the most physically demanding and impressive contemporary and classical ballet and jazz forms.

Asparagus (Josh Piterman) is welcomed into the gathering and as the moon appears, Old Deuteronomy speaks about The Moments of Happiness. Jemima (Stephanie Silcock) picks up on his intention and sings, in beautiful soprano voice, a short reprise to Memory. Silcock has her work cut out for her playing in the role made famous by Sarah Brightman, and voiced beautifully by Helen Massie in the 1992 Really Useful Productions’ film; for the most part she pulls it off with aplomb.

As the cats continue to wait for the time of the Jellicle choice, Jellylorum (Samantha Morley) tells a short story about Asparagus (senior) in Gus: The Theatre Cat. Morley’s voice is reminiscent of Tanner’s from the original cast – as too are most of the castings, bar a few clear exceptions.

The whole production, save the few musical and theatrical modernisations, is very much a restaging of the original, down to each mannerism, characterisation and step of choreography.

Gus takes us on a journey into his memory wherein we relive one of his great performances as Growltiger. This number should be the first to go in an update. The dialogue is difficult to understand - as could be said for much of the production according to a first time spectator who joined me, completely unaware of the premise or contents of the musical – and the Italian aria really adds nothing to the overarching narrative.

With the introduction or Skimbleshanks the railway cat (Ross Hannaford) and an abrupt entrance by Macavity (James Cooper) to kidnap Old Deuteronomy, the final act is nearing its close. Hannaford’s Skimbleshanks is as bouncy as can be, and although the demanding choreography would be unbelievably taxing Hannaford sings up a storm in the character part.

As Macavity steals away, Demeter (Amy Berrisford) and Bombalurina (Erin James - swing) lend all of their sexuality to Macavity, eliciting wolf whistles from an appreciative and positively enthralled audience as they wiggle and grind their bums and tails. With a suggestion from Rum Tum Tugger on a way to get Old Deuteronomy back, Mr Mistoffelees (Christopher Favaloro) appears from the heavens and single-handedly outdances the entire cast with a show of balletic skill which would put most dancers to shame. Finally he conjures Old Deuteronomy from under a sheet and the Jellicle choice can take place.

As Grizabella makes her final return, she sings a rousing version of Memory which finally elicits the attention of the Jellicles and sees her selected to ascend to the Heavyside Layer. The show closes with Old Deuteronomy schooling the onlookers in the Ad-Dressing of Cats.

If you were unlucky enough to have been at the 2010 production which toured through Adelaide, don’t let that put you off seeing this reworked show from the original creators.

Cats is a terrific distraction from the real world and a chance to engage one’s imagination, letting these talented performers aid you in personifying each and every feline friend or foe you’ve ever had.

I highly recommend everyone sees this wonderful production. Don’t listen to the haters and detractors. A production of this standard is your best chance at enjoying the show, even if you don’t come away loving it – so check it out.