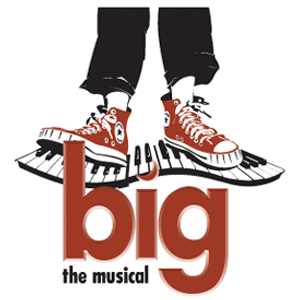 Big is hugely nostalgic for me. Released in the late 80s, the film is a personal favourite and resonated at a time when one was dreaming of growing up and attaining all of the privileges afforded to adults. The coming of age story is tried and tested, and presents wonderful character arcs for Susan Lawrence, (older) Josh Baskin, and Mr Macmillan; each learns something about themselves through the show.

The Northern Light Theatre Company production keeps the action in the ‘80s, and turns out some wonderful (albeit awful by today’s fashion standards) costume pieces including happy pants, floral jump suits, rolled suit jackets, and loads of puffy velvet and taffeta.

Sadly, other production elements are seriously lacking. The set is amateurish, the lighting design is undercooked, and the sound is tinny and poorly executed.

The set comprises several multi coloured boxes with various items of daily life (a table, bed, refrigerator, office desk, stove, arcade machine, etc) painted onto them. It is a concept which, with proper execution, could be quite effective. However, the painting standard is low and it seems no thought has been given to how these boxes will be used by the players. Oddly two ‘painted arcade machines’ are later replaced by two real arcade machines, which look much better, but only confuse the set concept further.

The lighting is lacklustre and fails to drive or define the action. The stage is often entirely lit when only two players are performing on the leg, and in other scenes lines are delivered from the dark. Follow spot is occasionally used to good effect, but not nearly often enough, and the grey stage is awash with white light and feels clinical and anaemic.

In spite of this director, David Gauci has assembled a strong lead cast. Kate Dempsey is outstanding in the role of Susan Lawrence and gives a beautiful vocal performance with measured acting. Her most recent love interest (older) Josh Baskin is played by Charlie Smith with pathos. Smith finds the joy and insecurity of a thirteen year old without patronising the audience; there are smiles on our faces watching Smith and Dempsey work together.

Angus Smith gives Mr Macmillan loads of guts; the famous piano scene with older Josh is delightful. The light up piano that has been sourced for this scene is icing on the cake.

The whole cast and ensemble give loads of energy; but the successes in this show belong to the leads. Some ensemble players still seemed unsure of their parts, which is concerning half way through the season. More thought about where characters are and why they are there would improve the ensembles ‘background business’. The whole show would also benefit from a lot more stillness.

Emma Knights keeps the orchestra tight, and Gauci has placed the action well on the stage, but there is still work to be done. Big closes next weekend.