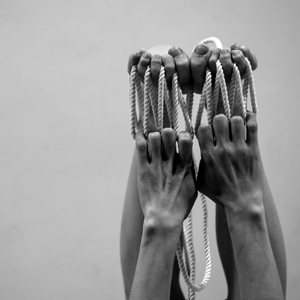 Profound moments of epiphany, for audiences and artists, come along only so often. When they do, they change the way work is created, because that change allows an unseen truth or reality of human existence and interaction to appear as if in a flash of brightly lit realisation.

Jane Austen, Mary Shelly, Berthold Brecht, Pablo Picasso, James Joyce, and Vittorio Di Sica wielded ancient and modern art forms in such a way they built new foundations for how we see the world, each other, and how we interact. They were forces for change in human consciousness still manifest today.

Kyle Page and Amber Haines’ Dancenorth, in collaboration with Japanese company Batik’s Josh Mu, Mamiko De and Rie Teranishi Batik have unleashed something new and profound for contemporary dance in their work Spectra.

Buddhism is central to Spectra. Basic knowledge of Buddhism’s focus on meditation geared towards warding off distraction and the egotism all humans have in them, to reach clearer realisation of what’s true, important and what’s merely transient is all you really need to know. As for Butoh, it’s a very assured, clear, gracious and ceremonial form of dance requiring extreme concentration. It makes sense then, that to successfully create dance melding the conscious fast and furious ‘look at me’ vanity in performance of western contemporary dance, with the slower, considered and impersonal, ritualised grace of Butoh, a completely new performance style is needed.

Spectra is a first demonstration of it, successfully gripping opening night audience’s hearts and minds in something so breathtakingly new, Buddhism in motion.

How? Spectra is feature length work in which the ensemble moves, to use an analogy, like a series of falling dominos. Their every measured brush, touch, jump, pull and slide neatly creates a sense of place and awareness greater than each individual.

There’s total focus on expressing something collectively, which has no place for a sense of the individual. When there is a solo, such as Amber Haines’ delicately poetic series of lift and glides, it is performed in such a way that any communicated sense of distinct personality is totally absent. There’s a moment of contemplation before action, something rarely seen in other contemporary work.

Emotion and personality in the work comes again and again from the shapes and relationships between the dancers, many mesmerising not just in their beauty but also in what they seem to say about how small humanity is amidst the forces of time and pure physics