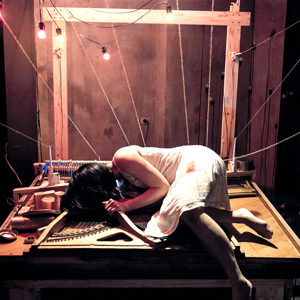 Who would have thought to mount a celebration of John Cage's 101st birthday? Cage is not the first composer one might have imagined would turn on the Taiwanese creative juices.

Cage was the American who delivered the music of silence, who deconstructed instruments, created "indeterminacy" as a musical concept. He was the great avant-garde original of the 20th Century. And it seems, you, Taiwan's M.O.V.E. Theatre, have fallen in love with his sounds, his philosophies and created both visual art and science around his themes. You have called it "sound immersion experimental" and turned him into experiential theatre for millennials.

Here in Adelaide for OzAsia, you have made the Nexus performance space dark and uncomfortable, so the people must stand, sit on the floor or perch uncertainly on the edge of the stage or the odd rough pine box. You allow them to move around but warn them not to touch the "instruments" in the blackout darkness. Then you play lights here and there as sonic effects are brought into use. Sometimes audience members help by pulling a string or two on some chime suspended aloft.

You add a dancer in white who shrugs on a suspended jacket connected by wires to an opened piano frame and then elicits certain notes as she strains invisible elements. There is a musician to play at this raw piano belly.  She pounds and strokes the strings with soft sticks and mallets.

Upon the stage boxes contain clear plastic tubes which, when activated, rise and fall under pneumatic pressure,  a laboratory pipe organ of some sort, squeezing out pipe whistles some soft and some so strident they assault the senses.

The dancer moves through the audience, adding percussive complements. White lines create a box in which the dancer struggles with a wooden box and it drums and thumps and then, as she leaps upon it, rattles wild staccato like a human castanet. Piece by piece, light falls upon the boxes around the room and new sounds are released. Is that rain on the roof or the shimmer of a shamanistic tube rattle? As one listens in the darkness, the sounds become layered and build into what is often a pleasant Cage-style sort of tune. Or not.

The random aspects of Cage philosophy are thrown into the mix, most exquisitely when a child in the audience is invited to follow a light through the room and then help to switch on and off and off and on a line of hanging light globes. The child innately understands the expectation of the piece and it is beautiful.

From the beginning and the one constant through the hour-long show is a pleasurable metranomic sound.

Finally, under a shaft of blinding light, it is illuminated as water droplets making controlled splashes into a glass beaker.

And thus, dear Taiwan, you bring us a night of strangeness and auditory adventure. Very serious and mysterious. Science and art and history and love in a big, dark wonderland.