Miss Julie and After Miss Julie 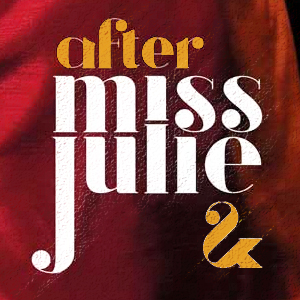 It was a great idea of director Geoff Brittain to present both Strindberg's ‘Miss Julie’, and English comedian and playwright Patrick Marber's version of the famous Swedish three-hander.  You can see them together in one night, as I did, on the closing night of the season on 18 October, or only ‘After Miss Julie’ during the week preceding.  Unfortunately, the ‘Miss Julie’-only season is kaput.

Strindberg is famous for his innovations in, and essays about, theatre, and particularly as a proponent of the new-fangled thing called naturalism.  ‘Miss Julie’ is all of a love triangle, class struggle and kitchen drama.  Not to underestimate the challenge, the action seemed to easily transfer to Marber's setting on the day of the 1945 British election when Labour won over Winston Churchill.

Geoff Brittain's set, manifested by Tony Clancy was complete, detailed and adequately passed for the servant's quarters of a manor both in 1888 Sweden and 1945 Britain.  I loved Ben Todd's costumes and Jennifer Morris's work on hair and make-up.  She considerably enhanced the female roles, especially as the actors traded roles between a servant cook and an aristocrat in the two plays.

Nick Fagan's man servant, betrothed to the cook but risking a roll in the hay with Miss Julie, was grumpy from beginning to end in both plays.  I sensed that Fagan missed copious opportunities to find a broader range of responses.  Rosie Williams was Miss Julie in the original and Christine the cook in the adaptation - Marber made the latter a diminished role.  Williams reached a suitably high level of distress as the Miss, but unfortunately lost considerable power due to breathlessness.  Cheryl Douglas was very convincing in both her roles with flashes of brilliance, imbuing her Christine with dignity and her Miss Julie with coquetry.  Excellent posture helps.  Come to think of it, Williams was pretty good in the hot and horny bits, too.

Notwithstanding the above, ‘Miss Julie’ had edge-of-seat tension throughout.  Miss Julie's sensually dangerous games and her improper exertion of power and subsequent fall had a similarity to Salome (which actually post-dates Miss Julie by three years).  While I perceived this during ‘Miss Julie’ (no, really, ask my companion that night!), Marber actually mentions this in ‘After Miss Julie’.  Geoff Brittain coached his actors to find Strindberg's razor sharp transformations of shifted status, changed plans, and switched loyalties with terrific timing, and demonstrated the same with ebullient blocking.  The tension lifts a teeny bit in ‘After Miss Julie’, simply because you get the plot, but there is great pleasure in hearing the 1945 vernacular, and you get carried away with it anyway.

I would certainly choose to be there on Saturday, 18 October.

When: 4 to 18 Oct
Where: The Little Theatre
Bookings: trybooking.com