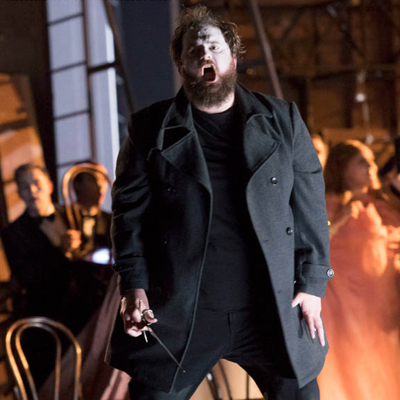 It is healthy and quaintly traditional that Adelaide Festivals should open with a thrill of dissent.

In the 2018 Adelaide Festival, it is the operatic centrepiece, Hamlet, which sets the proverbial cat among the pigeons.

It’s a love-it-or-hate it phenomenon.

Audiences have been emerging from the Festival Theatre roiling with indignation at the corruption of a favourite Shakespeare play.

Critics have been emerging to pen paeans of praise for the bold re-telling of a classic.

The one thing about which everyone seems to share enthusiasm is the staging which is big, bright, elegant and extravagant.

The main Ralph Myers set is like a grand period seaside hotel ballroom with French doors of impossible height. The Royal court and all the dignitaries sit about wining and dining therein. Glamour, glamour.

Then there is the fabulous drop-set, a whole new stage lowered from the fly to reveal the grave digger scene. Breath taking.

Then there is the Brett Dean music and the voices and performances from the assembled opera singers.

Everyone had their favourite star. Ophelia scored the most rousing applause followed by Gertrude and Hamlet himself.

This critic was captivated by the grace and nuance of the King.

There was quite a bit of debate about Rozencrantz and Guildenstern performed by twinned counter tenors. They are Tweedledum and Tweedledee, light relief in all the sturm und drang of Elsinore. Then they are murdered in their nice, matching grey suits.

There are many things not quite recognisable if one is expecting to see Hamlet in Hamlet.

For instance, Shakespearean English is right out the door.

Well, one gets a snippet of the famous Hamlet dialogue right at the very beginning of the production. Right there in the very opening scene one can recognise a sort-of iteration of “to be or not to be”.

Yep. The play’s opener. There it is. Just part of that greatest of all actor’s Shakespearean speeches as a scene-setter. Just a snippety ’to be or not to” bit.

It jars and perplexes and generated instant alienation for a large part of the audience.

Yes, there are many interpretations of Shakespeare through the theatrical world and the Adelaide Festival has seen many of them, even in exotic languages.

But, even then, usually Shakespeare’s words and, indeed, narrative chronology, is pretty much identifiable.

In this, our Festival co-director Neil Armfield’s acclaimed version, there is a sweeping newness of music and text.

The things traditionalists love and expect are gone.

There are no flowers in Ophelia’s mad world, no nightie, not even “rosemary for remembrance”. She’s all mud-smeared bare legs and her dad’s tail coat.

The things upon which audiences agree are that there's fine sound from the ASO and there’s a mighty rich ring from the huge choir.

There is spectacle, wild Glyndebourne-style extravagance on the operatic scale.

These are the things we love for a Festival of Arts headline show.

And, of course, the other thing we love is a good debate about whether or not we love it.

So, whichever way you look at it, Hamlet is a winner.