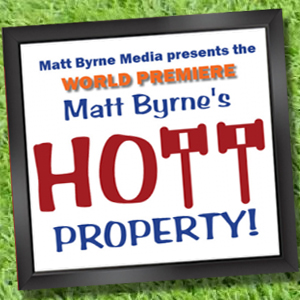 Matt Byrne Media will celebrate 21 years of spoof at Maxims with this year’s offering, Hott Property.

The cast includes well known Adelaide performers Theresa Dolman as Smokin’, Amber Platten as Pipin’ and Brad Butvila as Terry as well as Byrne as the redoubtable Red.

“It’s a piss-take on real estate and a bit of a funny take on what real estate agents and buyers go through” says performer Brad Butvila.

The show, which is a creation out of the mind of producer/director Byrne, jumps head first into the rollercoaster world of real estate with the support of real-life real estate salesman, Butvila, adding authenticity through his own unique experiences.

“Matt had the concept and most of [the show] nutted out, but, being in the industry there were certain things that didn’t make sense to me, so I had a little bit of input to make things make sense, and to add an element of truth to it” says Butvila.

The show might only have a cast of 4, but Byrne always packs the script with characters.

“Everyone has 4 or 5 different characters that they play throughout the show, including 4 couples looking to buy a home, and we all take 2 couples each” says Butvila.

Butvila’s main character is the dishonest salesman, and it has been quite difficult as this is the polar opposite to his own conduct when working in the industry. “I always prided myself on being a very ethical seller, so to play someone who is completely dodgy is outside of my wheelhouse” he says.

When it comes to the crazy character names, Byrne never holds back, and Hott Property is no exception.

There is singing and dancing and an interactive auction where the audience get to become part of the action. Butvila says he still hasn’t stopped laughing at the jokes yet, either.

“There will be some adlibbing that happens in the show, so we all have to know our lines enough to keep the show on track” he explains. “This is not highbrow humour in any sense of the word though, it’s dad jokes!” he concludes.

Luckily there won’t be too much madness with costume and set changes.

“There are a few props here and there, but nothing crazy, it’s more characterisation that is the differentiating factor” Butvila says.

There is a bit of a twist at the end, that those in the real estate game will really appreciate, but as ever, you will have to go see it to find out what it is.

“You’ll see how Real Estate agents manage to keep the buyers, the sellers and themselves happy by occasionally telling the truth!” concludes Byrne.

Matt Byrne’s Hott Property plays Maxim’s Wine Bar at 194a The Parade, Norwood (upstairs opposite the Norwood Hall) from February 13 to March 19 at 7:30 p.m. All Tix are $25 plus booking fee.