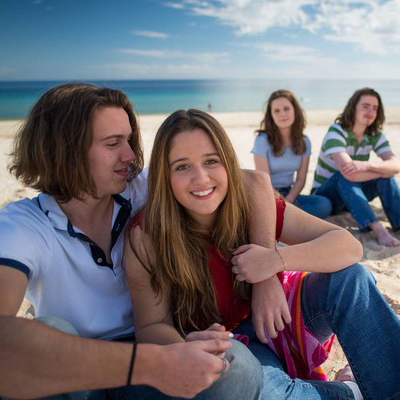 When first she read Puberty Blues, Zoe Muller was just 15.
She assumed the crude sexism within its pages was a “then” thing, a symptom of the 1970s surfie boy culture.
She loved Kathy Lette and Gabrielle Carey’s iconic Australian coming of age book.
"I loved the story and was fascinated and appalled by the way girls were treated in the 1970s,” she says.

So great was her intrigue with the world of the 70s surfer chicks and the great Australian beach culture that the Unley High School student sat down and wrote an adaptation of it for the stage.
Among the evolving points of interest was the sense that perhaps things had not changed quite as much as we like believe. There were actually similarities between the sexist attitudes described in the book and those she and her peers observed in their current world.
“I grew to see similarities which shouldn’t be,” she says.
The sexism of “then” took on a degree of “now”.

But perhaps the thing that resonated most strongly with the teenager was the sense that the book spoke to adolescents with an adolescent voice.

“I wrote the script to see if I could get the characters right,” she adds.
Zoe was a dedicated and seasoned thespian, even at the age of 15.

She had been involved in The Hills Youth Theatre Company since she was nine. So had her two besties, Jean Collins and Matilda Butler from Cornerstone College. Plans were hatched to bring the play to the stage. But first, it required official approval from the author. Zoe contacted the book’s agent.

“We got the rights,” thrills Zoe. “It was so exciting.”

Now, as they worked and planned together on Puberty Blues, they saw the opportunity not only to put on a new play but to create a new theatre company.

Thus was Deadset Theatre Company born.
‘"Deadset” is a word used a lot in Puberty Blues, explains Zoe.
Now the three girls are 17.

Zoe and Matilda are playing the lead female roles of Debbie and Sue. Jean is playing the role of Vicky. Zoe and Jean are directing and Matilda is Assistant Director. The nascent company held group auditions to find the rest of the 14-member cast.
“There was a huge turnout,” says Zoe. “Now we have a cast aged from 16 to 19 with one in the late 20s playing the high school teacher.

“It is crazy to be directing a bunch of 18-year-olds. There is lots of laughing. But it has been great. We have all bonded. I think that will be very noticeable on stage.”

Among other things, the cast went surfing for a day to get some authenticity in their depictions. It was a hit.  Zoe predicts that they will all be doing it more in the future.

Meanwhile, it has been the drug and sex culture of the 1970s compared to that of today which has fascinated them all, especially the sexism.
“Parents in the audience are going to say that the young don't have to deal with this these days but the teens will say, yes we do,” says Zoe.
“Most of the cast members say they have dealt with sexism in some form or another.
And then there are the drugs.

And thus it is that Puberty Blues may belong to another generation but it remains relevant today.

The show will run at Holden Street’s Studio Theatre from October 25 to 28 and tickets have been selling like hot cakes.

"It is 75 percent sold with over a week to go. It looks like a sellout,” says Zoe.

And it will not be a one-off for Deadset, she reveals.

She is working on a new project.  But she’s keeping it under wraps.