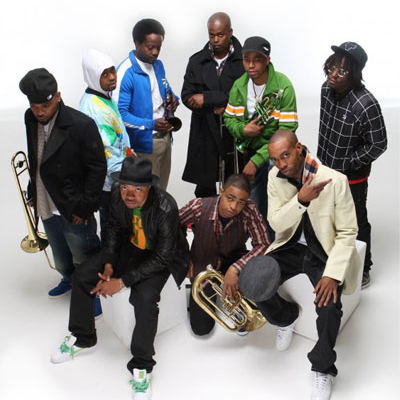 Eight years after first appearing at WOMADelaide, the Hypnotic Brass Ensemble return to remind us why they are still the coolest brass band in the history of music.

Hypnotic Brass Ensemble is largely a family affair, led by seven brothers who grew up playing and touring with their father, jazz great Kelan Phil Cohran.   As adults, they stepped out to forge their own music journey with great success.  The band's sound includes drums, guitar and bass, but the focus, unsurprisingly is the brass.  Featuring, trumpets, trombones and sousaphone, they mix their modern jazz soul roots with a raw hip hop edge.  Their music is a beautiful marriage of the two, fresh, sultry and in-your-face.

Recording and performing independent albums, with the likes of Damon Albarn and the Gorillaz, De La Soul, Snoop Dogg and Prince, they have taken brass to a whole new audience and earned their own musical stripes.

Their super high energy live performance, which differs significantly from their more laid back albums, has driven their notoriety and for very good reason.  On stage, the group are brassy, charismatic and cool-as-hell in spite of the 35 degree heat.   Easy on the eye and the ear, the often bare chested band members take it in turns to man the microphone on the vocal numbers.  Their rhyming overtures are a live-only extra and take the music up a notch.

The self-proclaimed "Bad Boys of Jazz" know how to entertain on so many levels; they tease the audience and get them involved from the moment the set starts.  Unlike other brass bands, who are largely behind their sizable instruments during song, Hypnotic Brass Ensemble are always engaged with the audience and feed off crowd interaction and response; they get plenty of it too!  The audience laps up the cheeky repertoire and calls back on cue whenever required.

These boys can come back to our fair shores any time they like.