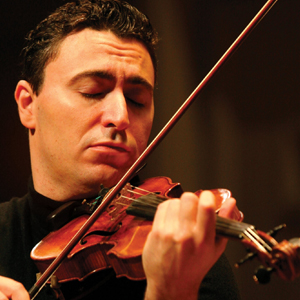 Onto the large Festival theatre stage, decorated only by two dramatic Musica Viva banners and three exquisite floral displays, walks the lonely figure of a man gently holding a violin. Apart from the Stradivarius, there is nothing outwardly impressive about the way he looks – he is not statuesque, he does not have movie-star looks – but when he places the violin under his chin and coaxes music from it he is all of a sudden a giant amongst men.

Maxim Vengerov is a wunderkind. He is the full musical deal. His technique is flawless – if there is such a thing – and he executes phenomenally difficult pieces with almost contemptuous ease. His simultaneous bowing with one hand and pizzicato with the other had mouths dropping during Ernst’s Etude No. 6; a remarkable set of variations on the traditional Irish tune The last Rose of Summer – and Paganini’s I Palpiti (arranged by Fritz Kreisler). As intricate and demanding as these two pieces were, Vengerov communicated the opposing emotions of tenderness and forcefulness with clarity, decisiveness and great control devoid of distracting and melodramatic gesture.

Vengerov has a remarkable musical memory, not just for keeping a score in his head (that goes without saying) but for ensuring both the dynamical and metrical treatments of a work are precisely balanced from the first to last note. Bach’s mighty Chaconne from the Violin Partita No.2 is fifteen minutes of pure bliss in the right hands, and in Vengerov’s the result was almost rapturous. Every phrase was finely balanced alongside the next, and moments of serene peace and delicate softness emerged untroubled from sections of controlled strength.

Beethoven’s Sonata for Violin and Piano No. 7 is full of vivid anguish and pain, and can easily become melodramatic. Beethoven’s superb score treats the two instruments as equals (one never plays second fiddle to the other!) and pianist Roustem Saitkoulov complemented Vengerov beautifully. Saitkoulov cuts a striking figure at the keyboard. He sits erect and like Vengerov is not one for flashy showmanship or for superfluous and distracting gesticulation. With him as for Vengerov it is all about communicating the music to the audience. They are both graceful musicians and they demand your attention as they tell their story – you could not lose yourself in the moment, even if you wanted to. This was certainly the case in the ‘bluesy’ middle movement of Ravel’s Sonata No.2 for Violin and Piano. Saitkoulov and Vengerov combined to produce an unfussed jazz ‘feel’ that is not altogether common with musicians from the Russian tradition. This was an absolute treat.

The relatively short Sonata No.6 for Solo Violin by Eugène Ysaÿe was a complete eye opener. This reviewer was not previously familiar with the work of Ysaÿe and to admit that I was anything but exhilarated by Vengerov’s performance of such a witty and phenomenally difficult piece (that demanded nothing short of musical gymnastics) would be a complete understatement. Vengerov displayed palpable connection with the composition as he shouldered his way through its intricate demands. His playing was spirited and dynamic, and then it was all over with a flick of the wrist and gentle smile.

Having been generously treated to three encores at the end of the program, the large audience was understandably generous and noisy in its appreciation of two modern masters - Saitkoulov and Vengerov.

Brava, brava, brava, and congratulations to Musica Viva for entrepreneuring such a stunning concert.