Bijou: A Cabaret of Secrets and Seduction 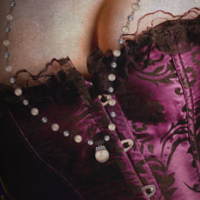 I love an element of surprise when going to the theatre – to go in without any preconceptions and immerse myself in new perspectives and experiences. But when I read the blurb from the seductive postcard-sized flyer for Bijou, I thought I had it sussed before I even caught a glimpse of the show. Thinking it to be standard cabaret fare that would equate to an entertaining, run of the mill night of cheek, I soon found I was deeply mistaken.

While enjoying the pensive opening cabaret tunes of pianist Alan Hicks, the ageing star of this one-woman show, Bijou, (Chrissie Shaw) saunters into the room looking battle scarred and world weary in her tatty fur, glossy pearls and heavily made up face. Rattling her tin cup for donations in front of our noses, it struck me this was not the glamorous production I was anticipating and I wondered if she would be able to hold the audience for the duration of the one hundred minute show.

However, after a spot of gleeful menacing of this rather reserved bunch of Canberrans it was time to get down to business, with Bijou stepping up to her platform in the middle of the room and unleashing her divine voice on the audience. Weaved through a selection of both familiar and obscure French and German songs from the 17th to the 20th Century, Bijou tells us of her colourful life of extremes that would make even the most liberated woman bury her blushing face in her hands.

Growing up in France during the Franco-Prussian War in the 1870’s, we follow Bijou through her intensely personal experiences that take her, in no particular order, from innocent and naïve young country girl to fetching stage actress living off her feminine charms, cynical proprietor of a Parisian brothel, and finally to an old lady resigned to her fate and haunted by her memories – what is actually the truth we never really know.

While taking some time to fully connect with the audience in the opening scenes, once Shaw hit her stride she clearly had their undivided attention. It snuck up on you quietly; one moment you were casually interested in this sordid story, and the next you were utterly absorbed in her every word and deed. And while the content matter does sound like it could be a little heavy for a pleasant night out, it is told in such an uninhibited fashion with a level of detachment and matter-of-factness that ensures it never feels overly intense.

It was quite a privilege to watch someone at Shaw’s age embody past versions of her character with such authenticity and precision, whether it be enfant, mademoiselle or madame. This was a woman who had lived multiple lives, constantly reinventing herself to survive in a man’s world, with each recreation creating another fascinating layer that is testament to the great depth of Shaw’s writing ability and character development.

The venue for the evening was the more intimate Street Two theatre, which was lovingly transformed by set designer Imogen Keen into a sumptuous, if somewhat seedy, bohemian den of delight complete with red velvet curtains, empty photo frames on the wall and candle lit tables. More than just a set, the surroundings served as tactile props for her elegant and stirring dance routines (choreographed by Liz Lea) as much as they contributed to the visual ambience.

Shaw’s chemistry with Hicks did come off as a little stilted to begin with, with their comedic timing just not quite joining forces. However, once they eased into the performance this worked itself out and they made amiable companions for the remainder of the show, with some charming duos sprinkled throughout.

Once again I was reminded of the astounding creativity out there in the Canberra performing arts world that has the perpetual ability to challenge the bounds of my imagination. Although Bijou set out to unravel the mysteries of a multi-faceted fictional character’s heart, there’s no doubt in my mind that the woman who penned her into life is just as fascinating.

When: 27 Aug to 8 Sep
Where: The Street Theatre
Bookings:  thestreet.org.au