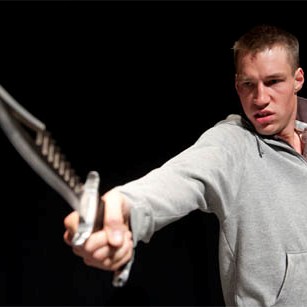 It’s easy to see why Fleeto won the Adelaide Critics Circle Award for Best Fringe Show in Week 1 and garners five stars wherever it plays around the world.  Director and writer Paddy Cunneen reached all his objectives stated in the program notes.  Cunneen achieves a high level of empathy with the razor gang members, the victims, and with the police who must bear the bad news and clean up the mess.

This is amply facilitated by the device of using the police detective as narrator and indeed, as moderator.  He needs now try to keep the knives in their sheaths recalling his own bayoneting of the enemy during war service – he well knows the twitch of a beating heart transmitted to your bloodied hand via sharpened steel.

The writing is beautiful and poetic – delivered often in rhyme filled with Glaswegian idioms.  The teenagers are fueled with excitement as the thrill of gang violence supplants warrior codes initiated for Scotland’s survival.

While the violence in the piece is symbolically executed, the excellent performances make it hyper-real – the physicality, presence and vocal power of Jordan McCurrach as the accidental assassin and Neil Leiper as the gang leader are quite incredible.  Pauline Knowles as the grief-stricken mother will not be forgotten while Andy Clark’s cop is heroic.

Cunneen’s thorough research with incarcerated young offenders and the Strathclyde Police, and his inquiring mind into why things are as they are, are evident in the empathetic and visceral connection between players and audience and his exploration of cause, effect and consequences, most evident in an amazing chance encounter between the murderer and the victim’s mother.

Fleeto is a modern Macbethian tragedy and a must-see at the Fringe.  Double bravo!

When: 13 to 18 Mar
Where: Holden Street Theatres - The Studio
Bookings: www.adelaidefringe.com.au