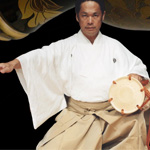 An opening show to this year's Japan-in-focus Oz Asia Festival, Four Winds brings together a quartet of well-regarded musicians to present a show that fuses the musical cultures of east and west.

The cornucopia of instruments crammed onto the modest dimensions of the Space Theatre gave a hint of the diverse sound about to be experienced.  With Falk 's sizable marimba flanked by Bevan's wind repertoire and Grigoryan's guitars, it whet the appetite and left one intrigued as to what was to come.

The show’s commencement introduced us to Okura and the Otsuzumi, a traditional Japanese hand drum.  After assembling the instrument from it’s various components, Okura let loose with a powerful vocal, accompanied by sharp, deliberate drum beats that echoed like drops of water hitting an empty bath.

Each barehanded slap had its preparation and methodical execution, filled with purpose and intent.  A master practitioner of Noh, a form of classical Japanese musical drama, Okura possesses an intense stage presence that’s enhanced by the drones and sirens of his vocal style.

As a concept that evolved out of a Japanese/Australian convention in Toyko, the show promised to blend the musical culture and stylings of its contributors, but just how successful they were in this is debatable.

For a large section of the show, the Japanese influence was difficult to detect, particularly when Okura was not onstage.  At this point, the music took on a jazz feel and lost its connection with the east.  Overall, the compositions lacked variance and the use of electric drum pads caused the show to lose some of the earthiness created by the otherwise acoustic nature of the performance.

Perhaps, they simply achieved the desired “fusion” too successfully for this audience member.

There is, however, no doubting the passion and talent of the members of this ensemble.  Bevan demonstrated the breadth of his musical diversity, switching between wind instruments throughout the set, while Grigoryan’s solo piece showed off this guitar virtuoso’s magical fingers.

Four Winds is an interesting piece that will definitely find its audience, though it won’t hit the mark for all.